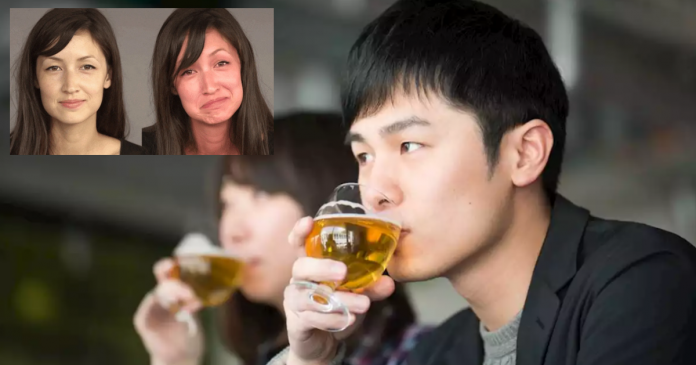 If you’re an Asian, you are probably familiar with the term ‘Asian glow’. No, it’s not a special facial treatment designed for Asians or will give anyone the radiance likely to that of an Asian’s skin.

It’s a physical mutation that apparently some 560 million people worldwide have. It’s a situation where your face turns red after consumption of alcohol. Yes, does it ring a bell to you now?

All the times you thought it was just your body getting warmed up after you’re down with few glasses of beer was actually your mutant gene getting triggered and sending you a warning.

A study recently conducted by Stanford University School of Medicine has unveiled that the flushed skin in a result of a mutation in mitochondrial aldehyde dehydrogenase 2 (ALDH2), a key enzyme associated with alcohol metabolism.

That’s not all there is though. The real (bad) news is that the redness on your skin might be an early sign of Alzheimer’s disease. According to Daria Mochly-Rosen, the senior author of the research, the reaction increases damage in cells when tested on mice and patient’s with Alzheimer’s.

Daria, who is also a professor in chemical and systems biology elaborated that ALDH2 is a fundamental enzyme responsible for eliminating toxic aldehydes, which are only produced in presence of alcohol.

Its deficient variant, the ALDH2*2 genotype, however has a much lower efficiency to remove the harmful aldehydes. Instead, the genotype counter reacts by producing acetaldehydes, which causes skin inflammation when prompted.

“Our data suggests that alcohol and Alzheimer’s disease-prone genes may put humans at greater risk of Alzheimer’s onset and progression. This is based on or patient-derived cell studies and our animal studies, as an epidemiological study in humans should be carried out in the future,”  quoted Daria’s statement in the study.

Though, one information that might make you feel slightly better is that further studies are required to determine if people with ALDH2*2 who regularly consume alcohol have a higher-than-average possibility of developing Alzheimer’s disease.

This particular research did not look into the potential relationship between reduced alcohol consumption and the decrease in the reaction of ALDH2*2 and effects of Alzheimer’s disease.

However introductory the study might suggest, it wouldn’t hurt to take precautionary steps for a better future. You don’t want to live your later years not remembering all the wonderful memories you carved your life with, do you?