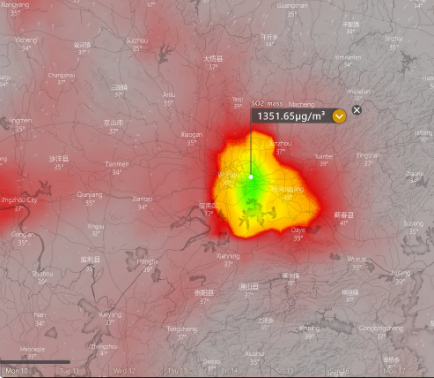 With the increasing death toll due to coronavirus, people all over the world are unable to hide their worries over this one satellite image showing a rise in sulfur dioxide (SO2) levels over Wuhan.

The satellite maps displayed such an alarming level of SO2 mass around Wuhan, the city believed to be the origin of the deadly coronavirus. Not only that, but it also shows high levels of SO2 over Chongqing city, which is under quarantine as well.

Based on a screenshot of a live map by a Czech-based weather service called Windy, it shows how SO2 levels in Wuhan at 1,350 micrograms per cubic meter (µg/m3) over the weekend.

According to the World Health Organization (WHO), a dosage of 500 µg/m3 of SO2 should not be exceeded for more than 10 minutes.

According to Meaww, scientists say that large amounts of SO2 are released when bodies are cremated or when medical waste is incinerated – which is why people on the internet are claiming that the image could be a sign of mass cremations.

High levels of SO2 were also shown over Chongqing city.

However, the rise of SO2 levels can also be resulting from burning fossil fuels and a number of other biochemical processes, not only mass cremation. Hence, it is best to wait what the official authority has to say about this rather than spreading unconfirmed and controversial news.

Currently, Wuhan remains in lockdown with 11 million people in quarantine.