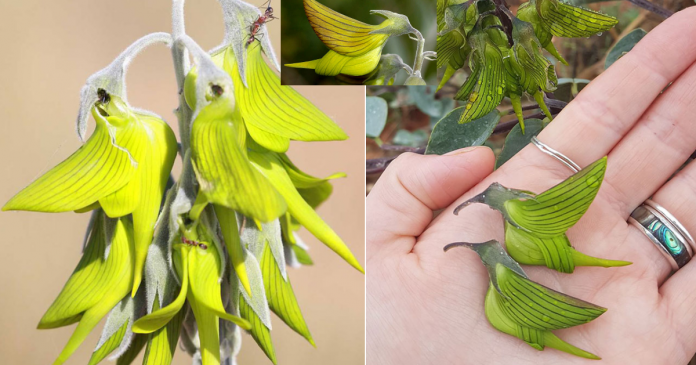 Nature never ceases to amaze us with its abundance of wonders. Just when we think we have seen enough of the world, we are surprised with news about nature that makes us go wow.

Recently a Reddit user by the name Octopus Prime shared the images of a plant that drove the whole internet into a debate frenzy. The plant had all the ordinary features; leaves, stem, branches and it was green.

Then what could have possibly turned people’s attention on this regular element of nature? The image came with a caption that read, “Check out these beautiful flowers that look like tiny hummingbirds!”

And just like that, the post blew up immediately. We checked it out too, and we have to say, we’re truly impressed. Take a look at the picture below to see for yourself.

The plant bears so much resemblance to a group of hummingbirds covered in dew gathered around a single branch like a perfect harmony orchestra. It appears that the ‘birds’ are spreading their ‘wings’ mid air trying to sip on nectar.

The post received an overwhelming 47.5k upvotes and about 400 comments. People were sharing their excitement on how is such a phenomenon is even possible and asking if it can be purchased.

It got even more interesting when a large group of the users started questioning the species and scientific details about the plant. One person came forward and provided logical answers to most of the questions displayed.

The scientific name of the plant is Crotalaria cunninghamii. In simpler terms, it’s called the regal birdflower or green birdflower. The species is mainly found in the inland of northern Australia.

It thrives in sandy areas hence why it grows primarily in sand dunes and along beaches. The natives have been using them to treat eye infections.

Though there were a variety of speculations circulated around the physical evolution of the plant, one apparent conclusion it can be pareidolia or a sort of optical illusion.

The plant only looks a group of hummingbirds to human eyes, that too only at a certain angle. To other animals and birds, it’s just a regular plant that grows with basic resources like many other floras.

It cannot possibly be biological mimicry, where plants adapt the shapes and forms of a certain animal to protect themselves from predators or even accommodate the process of pollination.

Since there are no actual hummingbirds found in Australia, the aforementioned evolution could not have taken place over the years. The fact that the plant looks unbelievably similar to a familiar bird species is just a mere coincidence.

Here are more photos of the plant: