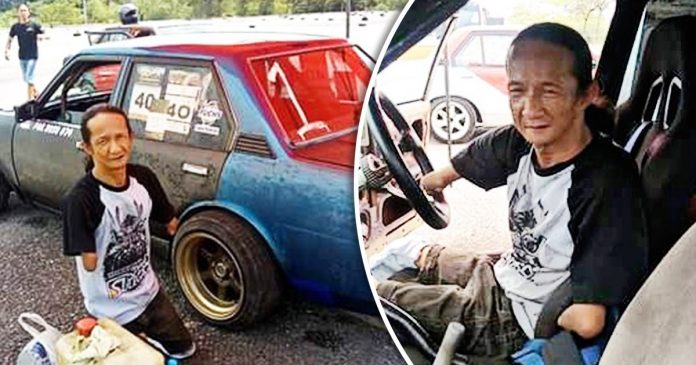 Everyone’s quest for sustenance is often different from another individual, as each have different wants and needs in life. As long as there is a will, there is definitely a way, even if it seems impossible to do at times.

For Pak Busu ( Malay for Mr. Busu), it’s running a car workshop in spite of his physical restraints as a disabled person. Though his vehicle repair service has been established for quite some time in his hometown in Melaka, Pak Busu is struggling to make a decent living as of late.

He expressed his frustration in his Instagram page that his shop is facing a serious decline in customers.

The man shared that the locals sympathized with his inability to draw customers to send their vehicles to his workshop.

In a Facebook post, Pak Busu explained that he expected the local community to come forward to offer help as he is the head of the family and has to support his wife and two children.

In fact, he feels that the society only seems to be sorry for him and his disability but does not give him the opportunity to prove himself. Despite not having limbs, the man prides in working hard to repair damaged cars in his workshop.

He is also a drifter under the disabled category who has won a few medals in local rallies. At the moment, he is only into fixing cars and not riding them for drift stunts.

Therefore, he hopes that they will abandon that sentiment as he needs money to cover expenses such as paying for workshop rent and family expenses. Pak Busu also hope that anyone who needed his service could contact him directly by the phone number included in the post.

The posts posted on social sites received positive responses from netizens who left heartwarming comments. They hoped that Pak Busu’s workshop will have more customers now that his story has been circulated all over the internet.

At the same time, some netizens praised Mr Busu’s persistence for not misusing his disability and portraying himself as a failure to gain sympathy and to continue to earn his living sincerely all on his own.

We hope that Pak Busu is given the chance he rightfully deserves to proof his capability with his skills. A little support goes a long way in times of need