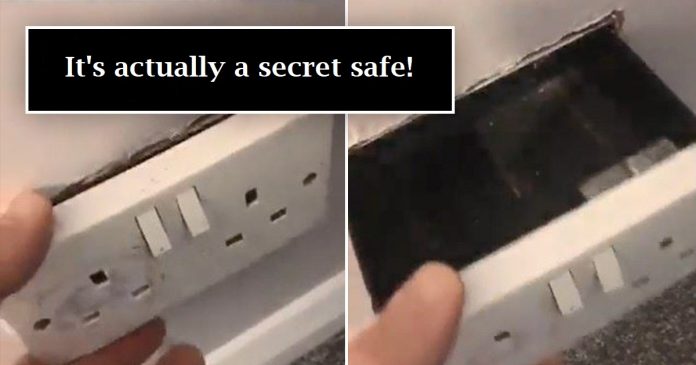 Dysfunctional electric sockets can really be a pain in the neck when one had dire needs to use it for. We are pretty sure that most of you have made circles around the house looking for an additional socket to plug your phone charger or your kitchen blender into.

Darren Steels and his wife endured the same experience, only worse. Of course, when they first moved into the new house, they were completely unaware of the ‘secret’ the one of the walls held.

When they first discovered the loose socket, they resorted to using the other functional one for usage around the stairways area. Apparently, the socket in discussion was at a a much more convenient distance from the stairways.

Though, after two years, something struck their sane mind and they thought they should get the socket changed. They called an electrician to come over and have a look at the socket to get it fixed.

Unfortunately (or fortunately), the electrician realized that it was beyond repair, not because of the prolonged effect of neglected maintenance but it had more to do with the fact that it wasn’t an actual socket to begin with.

The socket was a perfect cover-up for a secret safe that was hidden in the wall it was connected to! This is when things got a little exciting for Darren and his wife.

It’s like one of the scenes in a crime thriller movies where the riches’ houses are filled with secret doorways and safes to store their overwhelming assets away from visible sight.

The excitement however was short-lived when Darren pulled the socket out to reveal a small drawer that slid from the side of the wall. Instead of money or jewelries, all they found in it was chunks of dust and the body of a dead spider.

It’s a bummer that Darren didn’t strike a fortune. Nevertheless, he thought the entire incident was funny so he posted it on his Twitter account. Much to his surprise, the video received a total of 1.06 million views, over 56, 000 likes and 1500 retweets.

Here are some of the 890 comments that were listed under the video:

One person in particular noted how it resembled an element from a James Bond movie.

Some even tried to suggest it was left behind by the former residents.

Whatever the outcome was, it was indeed a humorous and memorable experience for anyone to go through. On another note, isn’t that a brilliant idea to keep your valuables at home?