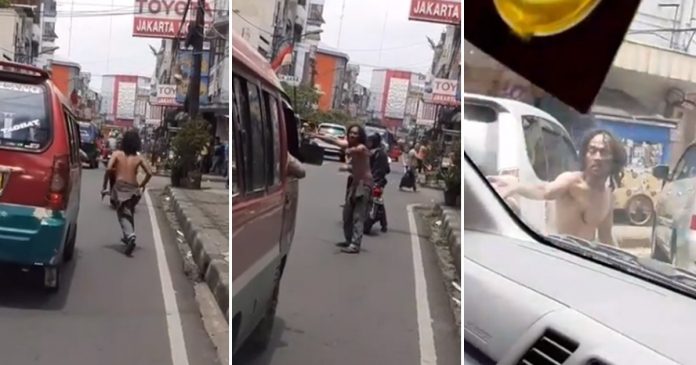 Homeless people often have to endure a stigma that they do not contribute anything to the society but this homeless man shows just how compassionate and charitable the homeless community can be when he helped to clear a busy road for an ambulance to pass through.

According to Nugraha, there was a demonstration taking place at the time and the road turned busy as people parked their cars on both sides of the road.

In an incident which took place in Bancuey, Indonesia on November 13, ambulance driver Muhammad Sandy Nugraha shared on Instagram how the unknown homeless man helped him to pass through the road.

Due to the heavy traffic jam, his ambulance was stuck but that was before the homeless man noticed his vehicle.

In his post, Nugraha said that the man quickly ran towards his ambulance and later gave signals to the other drivers to give way to him.

After he managed to pass through, he could hear the homeless man shouted “Long Live Ambulance” to mark his victory at helping an ambulance when the traffic was heavy.

According to Nugraha, he took the video of the homeless man helping him out to show to others that even mentally disturbed man like the homeless man knows what to do during an emergency situation.

The video truly shows that we cannot judge anyone by their appearance just like the homeless man.