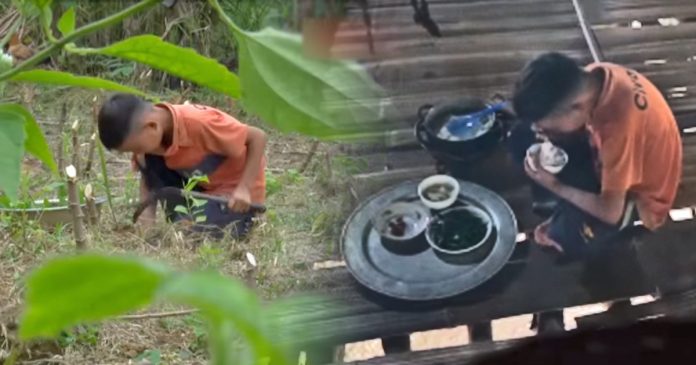 While most 10-year-olds’ childhoods are filled with love and care from their families. this young boy from Vietnam is forced to survive on his own and has no one to call family.

At a tender age of 10, Dang Van Khuyen has to be independent unlike most of his peers when his grandmother and his father passed away.

According to media in Vietnam, the young boy lived with his grandmother at a rural village in Vietnam’s Tuyên Quang province since he was born.

Growing up, Khuyen never really get to know his mother as he was too young when she passed away.

While he still had his father at the time, he did not get to meet him frequently as his father worked in the city as a construction worker.

Fortunately, Dang had his grandmother who took him in and raised him.

The poor family depended on the government’s subsidies and with the money that his father sent home every month.

Unfortunately, Dang’s life started to take a turn for the worse when his grandmother died because of old age.

Not long after his grandmother’s death, Dang received another heartbreaking news of his father’s unexpected passing.

He was at school when he was informed that his father encountered a fatal accident at his workplace.

With no one else that the boy could call family and rely on, Dang is forced to take care of himself.

Despite having to face the devastating loss of both of his only family members in a short amount of time, Dang continues his life just like before his grandmother and father passed away.

The independent boy grows vegetables and cooks for himself.

While his relatives along with his teachers and other villagers offered to adopt him, Dang respectfully declined their offers as he insisted to become independent and continue staying at his family home.

Dang’s teacher, however, will visit him at his house from time to time to check on him.

Dang may be an independent boy and is trying hard to get on his with his life but there is only so much that a 10-year-old could do by himself. We hope he would get the help and support he needs and deserves as soon as possible.