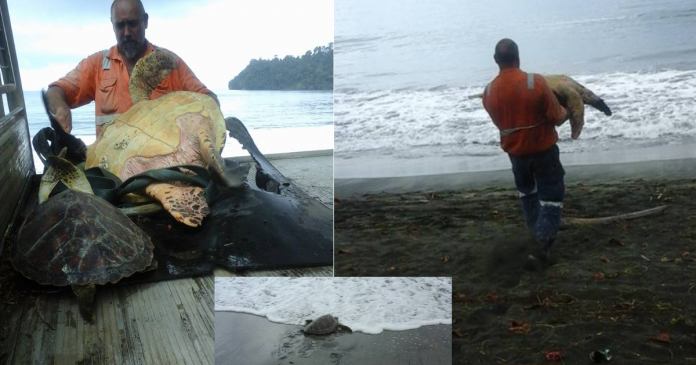 Papua New Guinea is one of the countries that are focused on the conservation of turtles due to the significant population of the marine creature in the country, and unfortunately the rapid decline of it.

Ironically, it’s also one of the countries that allows marine turtle fishing for the purpose of domestic consumption. You can find them displayed in the local markets for their different parts; meat, shell, eggs and even skin.

Turtle meat especially is considered as an exotic delicacy in many a country and the consumption even extends to medicinal and religious purposes.

Aaron Culling and his colleague Mark were at a local market in Papua New Guinea when they stumbled upon a pair of live sea turtles being sold for $50. Without thinking twice, they purchased the giant creatures.

If you think they were going to cut them up and make them into local dishes, you can be any more wrong. They headed straight to the beach, few miles drive away from the market.

Aaron then carried these turtles all the way from the vehicle to the shore, and released them into the sea. Apparently, this kind man has been buying and releasing turtles he finds at markets.

So far, Aaron has rescued 10 turtles, giving them a second chance at a life they deserve. He posted on his Facebook with the caption, “found these at the local market got them for 50 bucks drove 5km up the road and let them go.”

The turtles are happy to go back to where they belong

Since then, his post has received over 91,000 shares and praises for his good deed.

According to See Turtles, at least six to seven species of marine turtles are listed as endangered. These creatures can weigh anywhere from 100 pounds to a staggering 1000 pounds!

Due to their excellent adaptation to ocean, they can travel long distances to nest and feed, sustaining coldest water temperatures up to below 40˚F.

Poaching and accidental entanglement in fishing nets remain two of the most prominent reasons these marine turtles face danger. Involuntary plastic consumption poses serious issue to their sustenance as well.

Realistically, we don’t all need to go as far as Aaron to save turtles. We can contribute by reducing or completely eliminating our plastic consumption as well as putting an end to poaching and unintended fishing of these creatures.