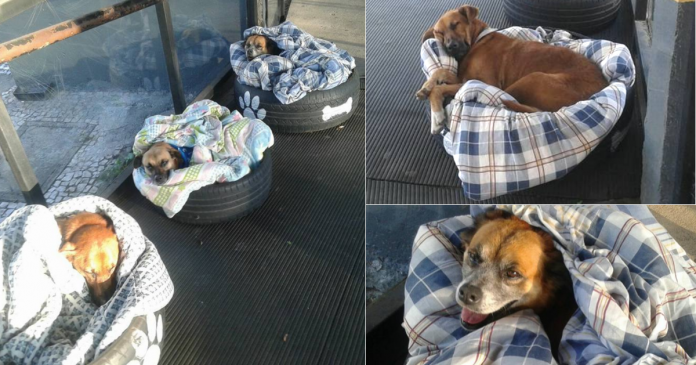 Extreme weather can be quite testing for strays, especially when it’s too cold and they have nowhere to take shelter from at night. Most of them just curl up under benches or trees without anything to cover themselves up.

Thanks to the kind people of the city of Barreirinha in Brazil, the stray dogs there can sleep in comfort even in low temperatures. There’s a bus terminal in the city that is frequented by strays from nearby area.

Unfortunately, during the cold season, the employees working there noticed the struggles the dogs had to endure to get a good night’s sleep. Fortunately, they gathered some used tires and makeshift blankets to make beds for the canines.

They lined it up at the sidewalk of the bus terminal, in a spot visible enough for the strays to spot and sleep in. It appears that the dogs have taken a liking to their new beds because almost every night, the beds will be filled in in no time!

They didn’t just stop there though. The employees even left some food for the dogs to nibble on once they’re awake. Inspired by their kind gesture, sometimes the locals would bring food for the strays too.

This selfless deed became viral when Facebook user Fabiane Rosa photographed these dogs in their comfy beds and posted it up online.

In the photos, each dog is seen snuggled up in the hollow space of the tires, lined with clothes and covered in blankets. The look of content on their faces are absolutely priceless.

Though not the best accommodation, Fabiane expressed her gratitude to the employees for being compassionate towards the animals and providing them with temporary home.

Since then her post has received 1500 comments and shared around more than 11,000 times. Netizens are incredibly warmed by the gesture and shared their praises.

“God bless these angels who take care of the little angels,” a comment read.

Another person said, “What a wonderful idea. And that works when people take care of those who need it so much. You are heroes. Thanks.”

Strays or not, these animals deserve to live a proper life and it’s our responsibility as humans to be kind to them. After all, all they expect is a little love and warmth.