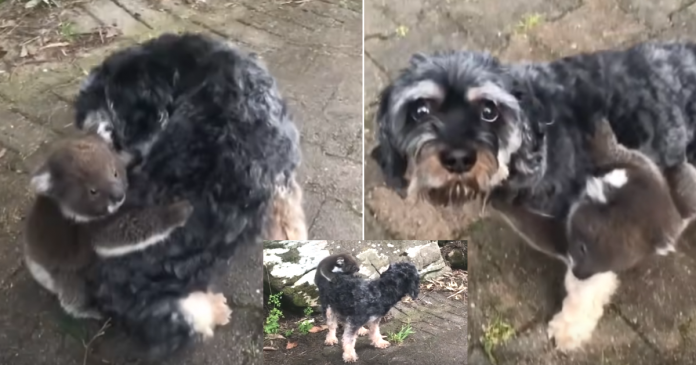 Imagine the shock that this dog had when a baby koala suddenly leaped onto his back and clung to its fur, no matter how hard he tried to get him off!

The hilarious mistaken identity happened when Tony was out on the yard with his owner, Henry at their home in Australia when a baby koala suddenly leaped onto his back.

The dog was taken aback by the baby koala and tried to get him off his fur.

However, every time he thought he had managed to get the baby koala off him, the adorable joey climbed back onto Tony’s body.

In the video which Henry recorded shows Tony looking surprised as he tries to nudge the baby koala off him.

The gentle canine finally managed to get rid of the baby koala by rolling on his back, prompted the baby marsupial to search for his real mother by climbing back to the tree.

According to Henry, he said that the baby koala who lives in their backyard recently became independent of his mother.

The baby might have mistaken Tony for his mother due to his fluffy fur!

Watch how Tony was taken aback by the bold baby koala here.