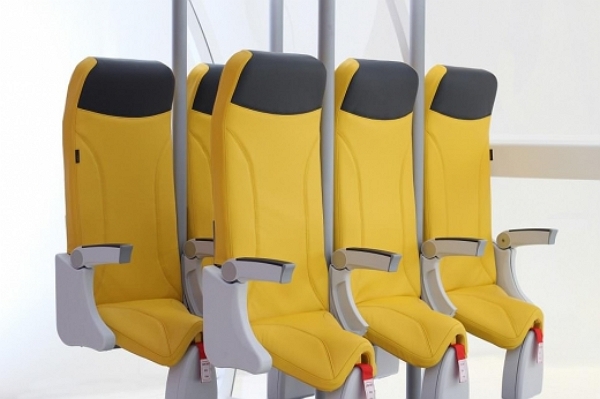 The aviation industry has seen a good deal of advancements over the years, both in the areas of technology as well as the physical evolution of the aircraft and the interiors.

From the availability of one-touch online ticket booking system to the customization of your seats and plane services according to your personal needs, a lot has been done to provide people with the best air travel experience.

Joining the cohort of these innovations is Skyrider 2.0. No, it’s not a futuristic carrier plane or ultra high speed travel jet. These bright yellow airplane seats are supposed be the answer to the age old travelers’ demand: More leg room for heaven’s sake!

Introduced at the Aircraft Interior Expo in Hamburg, Germany, Skyrider 2.0 is the brainchild of Italian airline seat manufacturers Aviointeriors. As the name would suggest, this is not the first time the company has come up with a unique solution to airplane comfort.

Version 1.0 was developed from the inspiration of horse saddles in 2010, and was rightfully rejected by the US Federal Aviation Administration for practical reasons. This new version, according to CNN Travel, ” aims to help airlines squeeze in more passengers by allowing an “ultra-high density” and reducing the space between rows.”

These seats are also priced at a lower range compared to standard airplane seats, stretching your money’s worth by large. However, one major compromise might have to be initiated on the passengers’ side.

The seats are almost half the size of actual ones that you’ll practically be standing in a slightly squated position.

The Skyrider 2.0 is designed for short-haul flights due to its extremely uncomfortable posture. The distance between each three-in-a-row seats is a mere 58cm though maximum comfort is assured from the extra soft padding and poles to secure them in place.

Aviointeriors defended their design, claiming that it’s highly beneficial for the airline companies. Below is the statement from a spokesperson for the manufacturers.

The prototype has received mixed reviews from people. Concerns included safety issues during unfortunate events as it would be difficult to evacuate passengers in a short amount of time while minimizing damage.

Elderly passengers will not be able to ride planes with these seats due to their limited level of comfort. The absence of storage space under the seats was in question as well.

Though the commercialization of these innovative seats is still unclear, it is reported that other airplane seat manufacturers are beginning to develop similar ‘economical’ seats inspired by Skyrider 2.0.