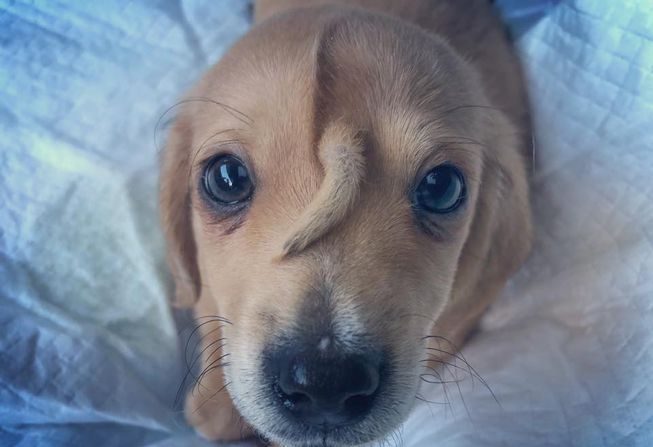 Listen up! There’s been a four-legged narwhal spotted in Missouri and all of the Internet is going crazy over him!

His full name is ‘Narwhal the Little Magical Furry Unicorn‘, a 10 week old puppy who was discovered in the freezing cold weather by a non-profit canine rescue organization, Mac’s Mission.

Why Narwhal you ask? When the puppy was first found with another older dog suspected to be his father, there was one thing that clearly made him stand out from any other dogs around the world.

He had a tail-like extension in the middle of his forehead, which measured one third of his actual tail. It was too short to block his vision and had no reflex reactions that made it twitch or wiggle like a real tail.

Narwhal had a frostbite on one of his legs, due to being exposed to the extreme weather for a prolonged time. Mac’s Mission specializes in dealing with dogs with special needs, abuse history and even physical defects so they felt like it was destiny that led them to the magical puppy.

In their Facebook post, they mentioned that he was in perfectly healthy condition except for some worms which can be easily treated.

Narwhal was brought to the vet for his unusual ‘horn’ to be checked. X-ray results showed that the tail was completely harmless and didn’t cause him any pain hence there wasn’t any medical reason for it to be removed.

Now that he’s a vet-approved furry unicorn, he’s gained an overwhelming fan base online who can’t seem to get enough of him. Applications to adopt Narwhal also came flooding in to the organization’s mailbox.

Unfortunately, Mac Mission’s representatives released a statement that he’s still too young to be put up for adoption.

“Everyone is very interested in him, but we hope that people also see other dogs available,” said their spokesperson.

They added that he will certainly be in the adoption list when he is a little older and had received his medications and vaccinations routinely. They also wanted to wait out and make sure that his tail doesn’t grow any longer or result in complications as he grows.