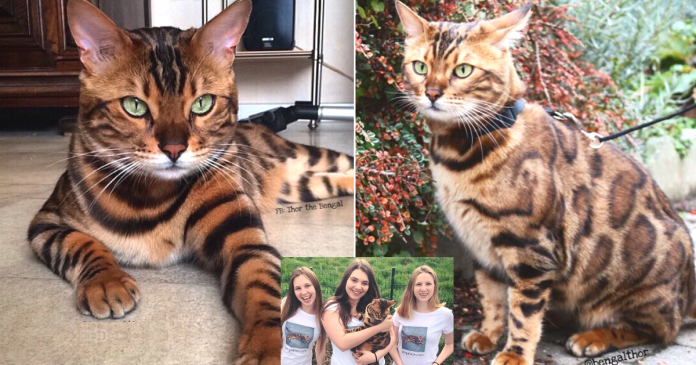 Known for their exceptional beauty and striking spots and stripes, Bengal cats are a favorite among cat lovers who appreciate their exotic looks.

This beautiful Bengal cat named Thor stands out from the rest and quickly won many hearts on the internet for his captivating looks.

With the perfect and glossy fur unlike other pet cats commonly found in many households, Thor the Bengal cat has instantly captured thousands of hearts on the internet.

Throwback to when I was a teenager! Oh how I miss those teenage years… now I got so many things to do, like modeling and eating shrimpies ?

At the moment, Thor has already gained 217,000 followers on his Instagram account where his owner, Ranj Cucovic regularly shares beautiful photos of Thor

Despite being the hybrids of domestic and wild cats, Thor is very affectionate and especially loves a good rub on his belly from time to time.

Unlike most cats who will run away when other cats are present, Thor, on the other hand, loves visitors.

My servants learned me the basic rules of Catiquette*! Rule number 1: always introduce yourself! ‘Hello, my name is Thor, nice to meet you! ?’ •PAWSHAKE• *cat+etiquette

He often warms up to strangers and other cats rather quickly.

“When we have a visitor, he doesn’t run away like some cats, but he goes to check who it is and smell their scent,” Cucovic said.

“And he likes them, they will hear it from Thor himself with a few massive meows.”

Just as social and friendly he is, Thor often sulks if no one responds to his chatter.

“He talks all day long and if we don’t answer his meowing, he gets pissed,” Cucovic added.

“And once a day, mostly before going to sleep, he gets crazy and climbs on the wall.”

When he is exhausted from the constant meowing and playing sessions, Thor would fall asleep on his back on the bed where he cannot be bothered even with the brightest camera’s flash!

See more of his mesmerising gaze and majestic poses on Instagram.

Wild elephants travel for 12 hours to mourn the death of...