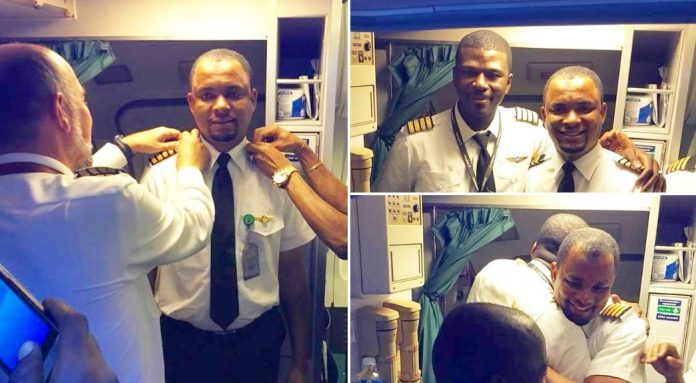 Every cloud has a silver lining, and it just took immense determination and persistence for one man to start from the very bottom to finally becoming the captain of an airplane to break through the very clouds that once deterred his dreams.

Mohammad Abubakar was a man of will and strength. From a very young age, he wanted to pursue his studies to a higher level. after finishing school, he traveled to Kaduna from a small town in Nigeria to enrol in Kaduna Polytechnic.

Due to the delayed submission of basic requirements, he failed to get into the college. Knowing that he can’t afford to waste time dwelling on his missed opportunity, he got a job as an airplane cleaner at Kabo Air for a daily salary of 200 Nairas (USD 0.50).

Despite the speculations of people around him, Mohammad stayed on with his humble job and earned the respect and admiration of his superiors. Thoroughly impressed with his hard work, they offered him the position of ground staff.

He Joined the Aviation industry 24years ago as Aircraft Cleaner. Today He is getting the Fourth Bar to becoming a CAPTAIN. Congratulations Mohammed Abubakar from all of us @AirAzman#FlySafeFlyAzman https://t.co/QVwapWYK3Q pic.twitter.com/DIHwPQOIPD

“Through my service in the company, I worked in almost all the units, except security. That helped me a lot in the aviation sector,” Mohammad told Daily Trust.

The consistency of his work paired with his never-give-up attitude landed him a promotion as a cabin crew member with a handsome salary of 17000 Naira. He worked there for eight long years before moving to Aero Contractors.

Starting as a flight attendant in the oil and gas department, Mohammad was stationed to work with their chartered services.

Later on, when they ventured into scheduled services for the flights, Mohammad once again proved his credibility by sharing some significant inputs he gained from his experiences thus far.

According to Apost, the Deputy Managing Director was impressed with Mohammad’s performance that he raised the salary to 170000 Naira. When he got his first paycheck, Mohammad was shocked beyond words that he even tried to return the check fearing it wasn’t his.

Though his life seemed to be only getting better by the day, deep inside Mohammad knew he wanted more. He was interested in becoming a pilot. So, instead of adopting a wealthy lifestyle, he saved up his salary to fund for his Private Pilot License training in Canada.

After returning to Nigeria as a certified pilot, he had just one more storm to break through. He needed to have a commercial pilot license to fly a plane there. Unfortunately, he had no more financial funding to spare.

Mohammad turned to his Deputy Managing Director to discuss his situation. To his surprise, they offered to assist and even sponsored him in his commercial pilot training back in Canada.

Mohammad acquired the license and secured himself a job as a pilot in Azman Air.

He realized that his journey wasn’t the smoothest or the quickest, considering he spent 24 years in the aviation industry before becoming a full fledged pilot.

You know what they say, when there’s a will, there’s most certainly a way.