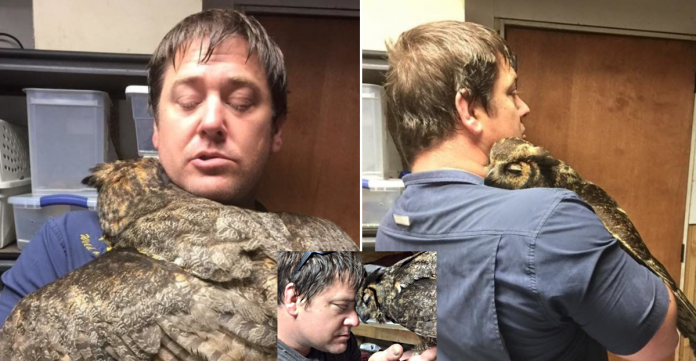 When a great horned owl was hit by a car, she was immediately found by rescuers and brought to the Wild At Heart Rescue facility in Mississippi. She was named GiGi.

The founder and director of the rescue, Missy Dubuisson expressed that it was one of the most critical cases they have handled. She was even surprised that the bird had managed to live up until that point.

GiGi was suffering a massive concussion, which resulted in head trauma as well as aspergillosis, a similar to pneumonia. In the facility, the bird received a thorough extensive treatment and care thanks to Doug Pojeky.

Touted as the ‘birds of prey whisperer’, Doug has a sentimental history especially with owls. When he was growing up, his father would always spot a great horned owl perching on the barn.

While him and the rest of the family rarely had a sight of it, on the day of his father’s death, he saw the owl overlooking the house before fleeting off into the woods.

So when he received an unexpected hug from GiGi, he was completely overwhelmed. “For some reason when that bird was hugging me, all I could think of was my dad,” he told the Dodo.

It happened when Doug returned to the facility after being away on a family trip. As soon as he returned, he met Gigi to give her a routine examination.

Just then, the bird started reaching for his shoulder where she went on to rest her head and wrap him in a warm embrace with her wings. In a now viral photos, their affectionate hug has gained attention of many.

While most of them beamed with giddiness at the cute gesture, some remained skeptical. Diana Flynt, rehabilitation supervisor at the Audubon Center for Birds of Prey, told Huffpost that it seemed more like a protective move rather than a hug and questioned if the act was the effect of GiGi’s head injury.

Even Doug chimed in to these doubtful claims saying that GiGi’s hug indeed surprised him as it was unusual for owls to do that.

Though he added, “the thing is, with birds of prey, for some reason I’m able to handle them and they’re extremely comfortable with me no matter what kind of bird they are,”

Hug or not, GiGi’s behavior is looked upon as an act of gratitude towards Doug for saving her life. Just when we think animals couldn’t be any more connected to humans, we are pleasantly surprised by the likes of GiGi the owl, among other animals and their humanly actions.

Watch the video below to witness GiGi’s bond with Doug: