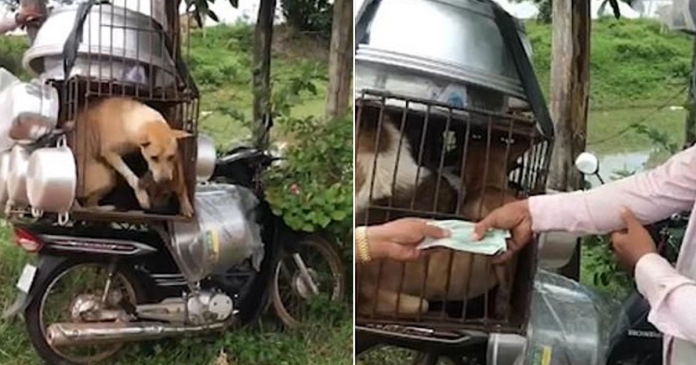 All of the nine dogs were originally destined to end up on dining tables but thanks to a kind-hearted man’s quick action, the canines managed to keep their lives.

Sam Phannarith from Cambodia was driving around Siem Reap province in Cambodia last September when he suddenly saw a motorcycle with a small cage at the back of it.

Suspicious of the ‘things’ he saw in the cage, Sam later followed the motorcycle closely from behind and that was when he realized there were dogs crammed inside of the cage

Sam knew that the dogs were not pets and were actually destined to be sold as meat.

Dog meat trade is on the rise in certain parts of Asia and Cambodia is not an exception.

Luckily for Sam, he was able to stop the innocent dogs from ending up at someone’s dining table

In the footage which Sam shared on social media, he can be seen giving some cash totaling US$350 to the seller before he opens the cage and let the dog free

It also appears that the seller has metal pots stacked on his motorcycle, ready to cook the canines whenever and wherever

According to the Daily Mail, Sam did not mind spending US$350 to free the dogs as he did not have the heart to just ignore the canines being sold as meat.

“I could not stand the idea that the dogs would be human food soon, so I bought them for $350 and I am happy,” he said.

“This was money well spent. It was about 40 dollars to give them their life and freedom. I hope that other people will see what I did and think more carefully about stopping eating dogs in the future.”

Why some people consume dog meats?

“Dog meat is like medicine. It tastes hot but it makes our body feel good. It is more delicious than pork,” said one consumer as reported by Channel News Asia.

Humane Society International (HSI) estimated around 30 million dogs across Asian countries including China, Thailand, and South Korea are slaughtered each year to meet the growing demand for dog meat.

When asked if he would do it again, Sam said that he would not hesitate to pay if it would ensure the freedom of the dogs. “I would do the same thing again. If I saw more dogs being taken for food I would pay to have them released.”

How they dress for school around the world?