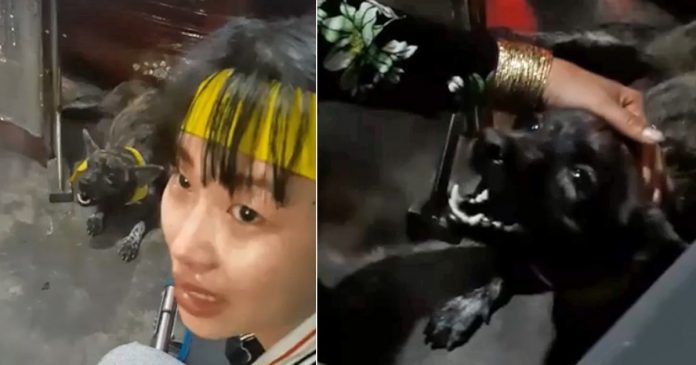 Even though it is not clear whether or not animals understand death, it is clear that they, too, grieve and mourn when their beloved owners pass away just like this black dog who cries non-stop after realizing his owner had left him for good.

In a heartbreaking video that has been circulating widely on social media, the black dog can be seen grieving and crying at his owner’s funeral.

It is absolutely sad to see how the dog tries to come to terms with the devastating death of his owner, to the point that he could not make even make any sound to express how heartbroken he is

Fortunately, the canine still has some of his owner’s family members to comfort him in this difficult time.

As the video continues, a woman can be seen trying to calm the dog down as she gently pats him on the head

According to the caption written along with the video, the dog’s owner was the grandfather of the family.

According to Gregory Berns, director of the Emory Center for Neuropolicy at Emory Univerity, dogs are just like humans when it comes to mourning and grieving.

“If I were to speculate, I would guess that, like people, some dogs mourn and others don’t,” he said.

Death of a loved one can be hard to accept but hopefully, the dog will come to terms with his owner’s passing one day.