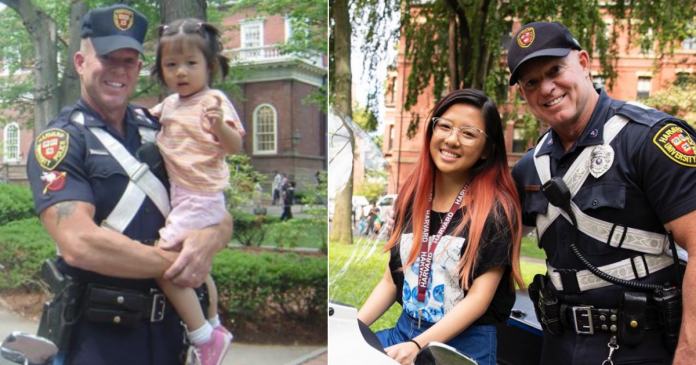 Wang was only 3 years old when her father brought her to visit Harvard University where she took a photo with a police officer. Little did she know the photo was the sign that she would return to Harvard as a student 15 years later!

According to Crystal Wang in an interview with CNN, she was just a little girl when she took a photo together with Officer Charles Marren on the Harvard University campus.

In the photo which was taken by her father, Jin, little Wang was pictured in the arms of Marren who was a Harvard University police officer

However, none of them thought that the photo would prove to be prophetic.

Wang explained that she came to Harvard after she got accepted to Harvard’s dual degree program with Berklee College of Music.

It was a 5-year program in which Wang will receive both a Bachelor of Arts (A.B.) from Harvard College and a master’s degree from Berklee College of Music when she graduates

She never knew that the photo she took with Marren existed until her father showed after she entered Harvard as a student.

Wang was skeptical when her father told her to find Marren at the campus as she thought that he might not work at Harvard anymore.

“In my mind, the likelihood of [finding him] was very low,” Wang told CNN.

Nevertheless, a Harvard Gazette’s reporter later saw the original photo that Wang posted on her Instagram and recognized Marren. It did not take long for them to get in touch again and reunite after 15 years.

To commemorate the 15-year-old encounter, Marren and Wang decided to recreate the original photo

When Crystal Wang was 3 years old, she was photographed with Officer Charles Marren on the Harvard campus. When she moved in with the Class of 2023, the pair met again. (Swipe to see the original photo ?)⠀ ⠀ Photo: Stephanie Mitchell/Harvard Staff Photographer

However, this time, Wang sat on Marren’s police motorcycle with him standing by her side.

While Wang obviously looks much mature compared to how small she was in the original photo, Marren, on the other hand, seems to have not aged at all!

As for Wang, she felt an instant connection when the two reunited. “It was just a really, really good time. I really connected with him,” she said.