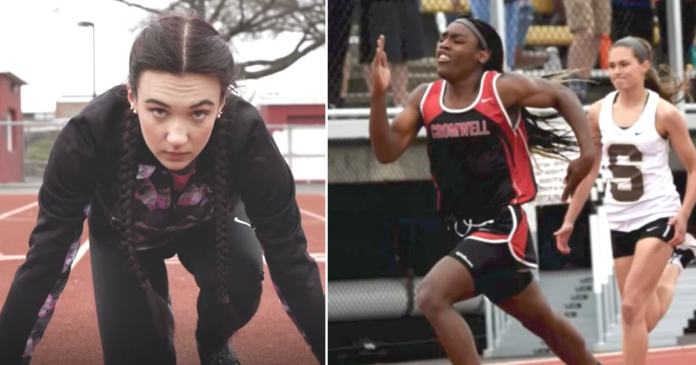 According to the 16-year-old athlete from Bloomfield, Connecticut, Soule argues that despite her best effort, she and other female athletes may never be able to defeat transgender athletes due to the biological differences between them

“The first race that I competed against a transgender athlete was during my freshman year and once the gun went off, the two transgender athletes took off flying and left all of us girls in the dust,” Soule said in her YouTube video.

“I knew right then and there that some girls will be missing out great opportunities to succeed and that women could be completely eradicated from their own sports,” she said.

“We all watched in surprise, as our chances to win vanished.”

It certainly did not help when the media painted Soule and other female athletes who tried to take a public stand for their rights as bigots and losers.

“The media has been even worse, attacking us and portraying girls as sore losers. And that we should try harder,” Soule said in the video.

Unfortunately, there is only so much they could do when they still have to compete against transgender athletes who were biologically-born as males

“We do train very hard, but when a mediocre boy athlete can outperform the best girl out there, any day, because of their physical superiority, we are just losers, not sore losers,” she said.

No longer wanted to put up with the biased and unjust policies, Soule now wants to fight for the government to revise H.R.5 – Equality Act which allows transgender athletes to compete in women’s sports

Under the Equality Act, no American citizen can be discriminated against their “sex, sexual orientation, and gender identity in a wide variety of areas” which include education, federal funding, and housing.

While the bill was passed to protect LGBTQ individuals from being discriminated against, Florida Republican Rep. Greg Steube argued that the bill would hinder competitiveness in women’s sports and women’s eligibility for athletic scholarships.

“A sports team couldn’t treat a transgender woman differently from a woman who is not transgender on the ground that the former is male-bodied,” Steube said, according to Politico.

“Yet, the reality is [when] putting male and female-bodied athletes together in open sport … females lose.”

Thanks to Soule for being vocal about female athletes’ rights, the U.S. Department of Education Office for Civil Rights has agreed to investigate the situation in Connecticut

“I will not be quiet about this. HR5, The Equality Act [in the US], will impose a nationwide transgender athletics policy on America. It will endanger women and girls of all ages by opening up every sports team in the country to any male who self-identifies as female,” Soule said regarding the complaint she made with the U.S. Department of Education.

“This policy will take away our medals, records, scholarships and dreams. I can’t allow this… I’m standing up to tell Congress. Protect us. Don’t take away our dreams. Don’t pass HR5.”