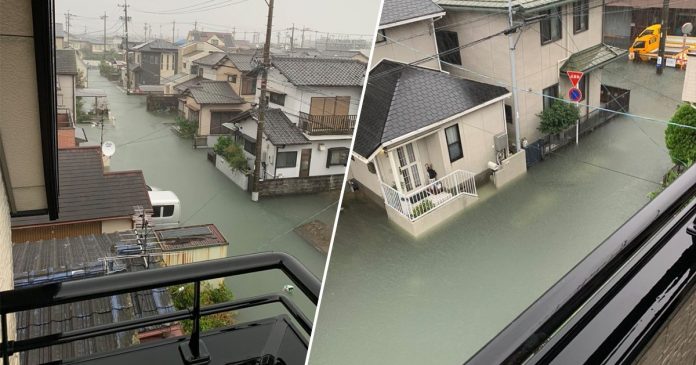 Japan was recently hit by the strongest typhoon in 60 years, Typhoon Hagibis, on October 12, causing massive damages and floods in many prefectures like Tokyo, Shizuoka, and Chiba. Despite the damages and flooding, Japan still managed to impress everyone with how amazingly clear the floodwaters were.

The recent Typhoon Hagibis crashed Japan with strong winds of 160 mph and heavy rainfall that the country had to face major flooding following the typhoon.

The powerful typhoon also caused power outages, leaving 120,000 of households without power and clean water until Sunday while at least 600,000 residents were forced to evacuate

Along with flash flooding, they also had to deal with river flooding as water from Chikuma river engulfed the residential neighbourhoods in the cities of Nagano and Chikuma.

Despite the major flash flooding and river flooding, the internet is impressed by the clear floodwaters in Japan

Instead of the floodwaters looking muddy and dirty like what usually looks like in many parts of the world after major flooding occurs, Japan, however, looks like a giant swimming pool

In photos and videos that have quickly circulated on social media after the typhoon passed, the floodwaters in Japan appear to be clean and clear of debris, litter, and mud

At first glance, some people initially thought that these photos of the underground station were captured at a swimming pool

Even in the underground stations, the floodwaters seem clear of trash and mud!

Thanks to Japan’s high standards of hygiene and sanitation, many netizens expressed their admiration and praises to the country

Some even went as far as saying that the floods in Japan look like the canals in Venice.

Clearly, all of us need to learn something from Japan’s strict maintenance of hygiene!