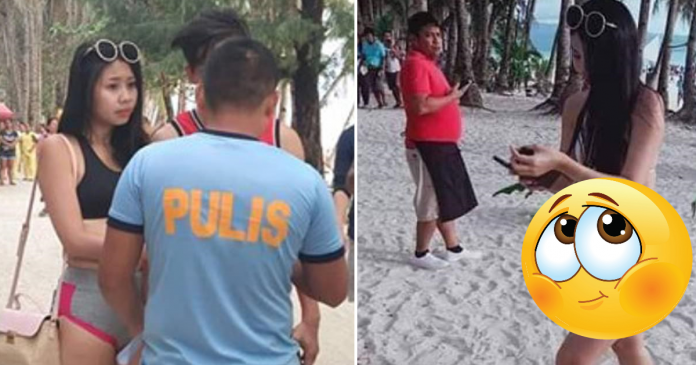 A beautiful Taiwanese tourist’s attempt to portray “expression and appreciation of self” turned much against her favor when she was reported and called upon to the local police station while she was on a vacation at Boracay Island.

In an outrageous incident that occurred on Oct 9, the woman was spotted wearing a white two-piece bikini at a beach nearby.

The locals were bothered by the sight, as the ‘clothing’ was considered inappropriate among the community in the Philippines.

When she was caught wearing a similar outfit in red the following day, the hotel she and her boyfriend were staying in resorted to the Boracay Inter-Agency Management and Rehabilitation Group to address the issue.

She was fined 2,500 Peso. Sorry! We can’t show the unedited photo on Facebook!

The tourist defended her outfit, explaining that it was harmless and is something she often wears back in Taiwan. Legally, there are no laws that prohibit the wearing of certain clothing but it is an established rule that exposed outfits are a hard no-no in the island.

While this has caused an stir among the locals who are divided into “it was lewd and disrespectful” and “there’s nothing wrong with it”, another group of netizens are demanding ‘proof’ by looking for the photos before they could make their rational judgement on it.

The tourist couple reportedly left the island on Oct 11, after they had cleared the fine.

What do you think about the incident? Do you think the lady has the freedom to wear what she likes on a public beach?