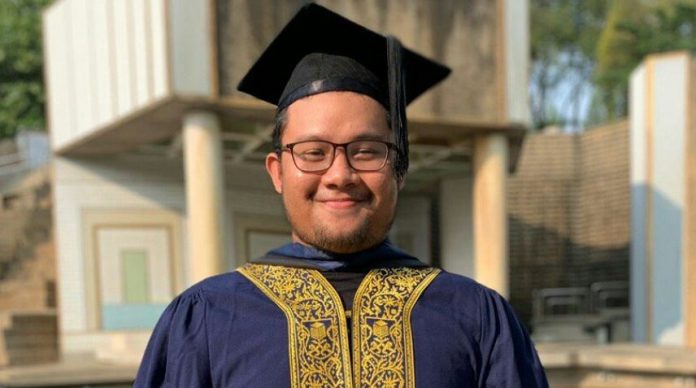 Imagine failing your degree multiple times! Many of us would want to give up after failing several times but for this inspiring Malaysian man, giving up was not an option even after he failed 18 times in his degree.

According to the Malay Mail, Muhammad Rafiq Izzat Zaidi who took up a Bachelor of Law degree at Universiti Teknologi Mara (UiTM) back in 2013 said that he was a bit of a slow learner when it comes to studying law subjects.

“I’m a slow learner in law school, I need to fail roughly two to three times to pass certain subjects,” Rafiq wrote in a tweet that has gone viral on Twitter.

In an interview with mStar, Rafiq said that he had difficulties adjusting to a new learning environment which led to him needing more time to understand a subject

“In my first semester, I failed four subjects,” he told mStar. “When my friends studied up to all eight semesters which is four years, I was still not finished. Seeing them start careers in the legal world put a lot of pressure on me.”

The pressure of graduating later quickly added up when his relatives kept on asking him about his studies. “‘Rafiq, when are you going to finish studying? You’ve been in uni for so long’,” he said, giving an example of questions he often received from his relatives.

After failing a subject three times, Rafiq revealed that he was almost expelled from the university but he was given a second chance after he made an appeal.

Due to having a hard time to pass the subjects and the pressure he received, Rafiq admitted that there were times when he considered committing suicide

“There was a time I considered suicide. I was driving and felt like crashing my car into opposing traffic to release tension,” he said. Thankfully, the 25-year-old graduate came to his senses after thinking it through.

“But I didn’t do it because I thought what’s the point, it wasn’t going to solve my problem,” he added.

In spite of the long semesters he had to endure due to his multiple failures, Rafiq said that it had helped him to remember what he learned.

“But the more I failed, the deeper the subject is engraved in my head though that cost me 11 semesters,” he said.

He currently works as a chamber’s trainee.

“I’m thankful for finally finishing my studies after so long. I will work hard to become a lawyer and own my own law firm,” he said.

As for others who are also facing a similar situation, Rafiq had a piece of advice to hold on to.

“Remember, if you fail seven times, you have to get up for the eighth. Hard work pays off,” he said.