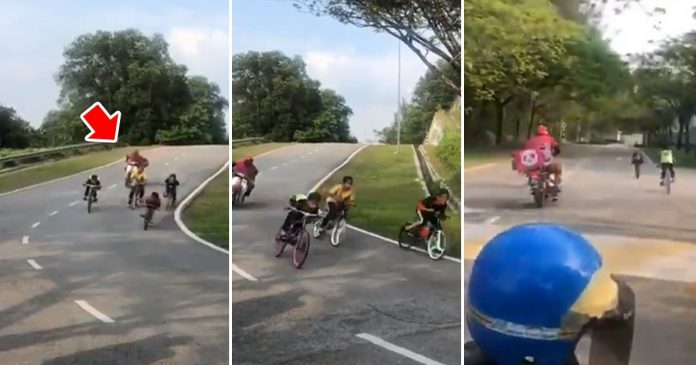 When it comes to delivering food, food delivery riders including Foodpanda often prioritizes speed to ensure that customers get their orders on time. However, this Foodpanda rider chose to let slow down and let a group of boys won instead when they challenged him to a race!

In a video that has made rounds on Twitter, a Foodpanda rider can be seen engaging in a short race with a group of boys in a remote area in Malaysia.

While the Foodpanda rider clearly had an advantage over the boys who rode their bicycles, it seems like he deliberately slowed down when he came across the boys and let them passed him.

In the short race, it looks like the boys managed to leave the Foodpanda rider far behind them as the video continues

According to Twitter user @raidaimannn,  the Foodpanda rider was in the midst of delivering orders to the customers when he saw the boys cycling on the road.

Despite racing against the time, the food rider still managed to make the boys’ day and the netizens were totally moved by his gesture

However, there were some netizens who criticized the boys’ action to cycling on the public road as it was dangerous.

Hopefully, the boys will learn their mistakes and cycle at a park rather than on the public roads. As for the Foodpanda rider, kudos for being a gentleman to young children!