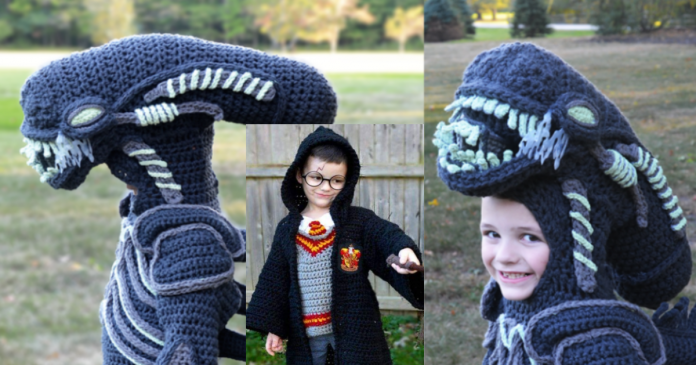 According to BoredPanda, Stephanie Pokorny first learned how to crochet when she was 16 years old.

“Each of the costumes for kids takes between 25-40 hours, and I tend to work on them over the course of about two weeks,” she wrote on BoredPanda.

“I have been crocheting since I was 16. I was taught by my Grandma, and these creative costumes are my passion.”

Her love for crocheting continues when she became a mother

Luckily, her whole family, too, loves Halloween as much as she does!

“Our family is absolutely obsessed with all things Halloween, and so each year I freehand crochet full-body Halloween costumes, with no actual crochet patterns, for my children,” she wrote.

“Sometimes these unique costumes are from classic 80s movies, other times from whatever movie or toy is popular at the time,” Stephanie wrote.

So far, Stephanie has made costumes of Pennywise the clown, Predator, Smurfs, a garden gnome, ET, Harry Potter, and ‘Mickey Mouse pizza,’ something that she said was invented by her son

Stephanie added that her family lives in an area where it sometimes snows on Halloween. Thanks to her crocheted costumes, her two youngest children get to trick-or-treat and stays cozy even the weather is cold.

“All are done freehand with no pattern. Most remain one of a kind. Selected ones become a pattern so others may create their own,” she wrote on Crochetverse, where she posts pictures of her costumes and patterns for readers.

For Stephanie, the joy of being able to make costumes for her children just like her mother did for her when she was younger was priceless.

“My mother made my costumes for me as a child, and I remember being beyond excited to wear them. It brings me such joy to be able to do the same for my children!”