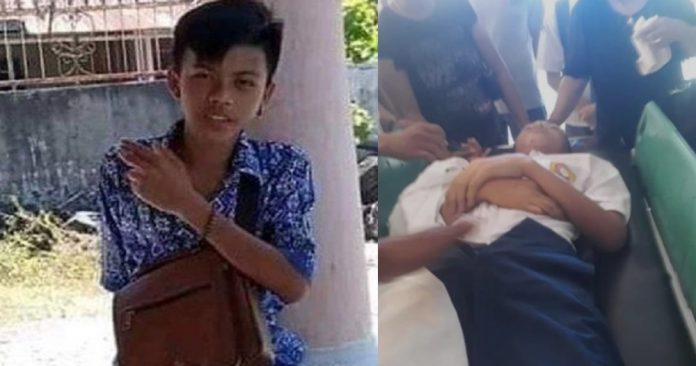 That was what happened at a school in Sulawesi, Indonesia, when a 14-year-old student died after he was forced to run 20 laps under the hot sun as punishment for being late to school.

According to Guanghua Daily, the student who was identified as Fanly, left home at 6.30 am and arrived at school at 7.25 am, 25 minutes late as school starts at 7 am.

As punishment for arriving late to school, he and five other students who were also late were forced to run 20 laps on the school’s sports ground under the scorching morning sun

However, Fanly was reported to tell the teacher punished him that he felt dizzy and would like to take a brief rest. Nonetheless, his request was denied and he was forced to continue running.

It was later that the boy suddenly fell on the ground while carrying out his punishment and passed out.

Meanwhile, the student’s father, Joni Lahingide, believes that the teacher who punished his son is the one to blame over his death for ignoring Fanly’s request to take a rest and for forcing him to run in the hot weather

Nevertheless, the real cause of the student’s death will only be confirmed once the autopsy results are released.

Currently, Fanly’s parents are seeking for their son’s justice as they have lodged a police report and are preparing to take legal action by filing a lawsuit against the school.

While the lawsuit will never bring their son to life back, they hope it will prevent other students from falling victim to the teacher’s harsh punishments in the future.