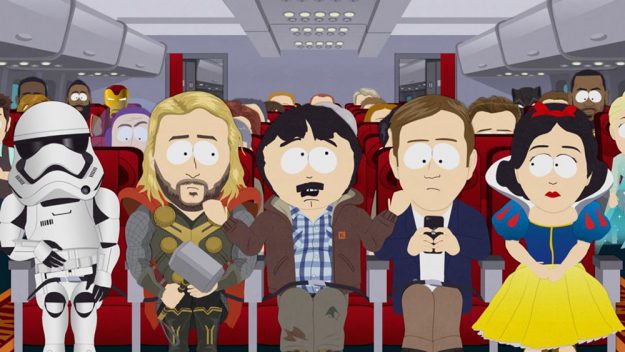 China has banned the American sitcom “South Park” after an episode of the satirical show mocked the censorship in China and made references to China’s mass detention of Uyghur minority as well as Winnie the Pooh imagery.

The ban came after South Park’s latest episode, “Band In China” shows a direct plotline of Randy Marsh, a character from the sitcom, caught selling drugs in China.

According to CNBC, the forced labor and re-education are a direct reference to China’s crackdown on their ethnic minority Uyghur.

“Band in China” also mentioned about the Organ Harvesting of Falun Gong Practitioners in China committed by the CCP. The China Tribunal has confirmed the allegations of organ harvesting in China is real and the news were reported by main stream media: https://press.chinatribunal.com/press/

In the episode, Randy who is locked up in an overcrowded prison cell is given an electric shock by a prison guard and seen sharing a conversation with Winnie the Pooh and Piglet

“Some people said Pooh looked like the Chinese president, so we’re illegal in China now,” Piglet says in the episode to which Randy replies, “What kind of madhouse is this?”

While the famous cartoon characters seem harmless, it is actually a reference to China’s current president Xi Jinping

The imagery of Winnie the Pooh was banned from China’s internet as the people compared him to the current president.

It has since become a symbol of resistance by the Chinese people towards the government.

The “Band In China” episode also mocks Hollywood’s reliance on China’s strict censorship, as reported by the Hollywood Reporter

In the same episode, the characters Stan, Jimmy, Kenny and Butters become popular celebrities and attract a manager who wants to feature them in a film. However, the script keeps changing to avoid China’s strict media censorship.

“Now I know how Hollywood writers feel,” Stan says while a prison guard watches him as he writes and makes changes to the film script so that it can be distributed in China.

Following the direct references and mocking made by the sitcom towards China, the Chinese government has completely banned any mentions, videos, and discussion forums of the show on the internet

The Chinese government under the Communist Party is notoriously known for controlling keywords and phrases on the country’s social media platforms and blocking popular social media sites such as Google, Twitter, and Facebook in the country.

After China bans every clip and mentions of the comedy show, the creators of “South Park” later issued a fake apology to China on Twitter

“Like the NBA, we welcome the Chinese censors into our homes and into our hearts,” Trey Parker and Matt Stone wrote.

“We too love money more than freedom and democracy. Tune into our 300th episode this Wednesday at 10! Long live the great Communist Party of China. May the autumn’s sorghum harvest be bountiful. We good now China?”

Their statement of “apology” also mocks NBA after they apologized to China for a tweet by Houston Rockets general manager Daryl Morey. In a now-deleted tweet by Morey, he showed solidarity with the pro-democracy protesters in Hong Kong.

“Fight for freedom. Stand with Hong Kong,” Morey tweeted which has sparked anger from China

The tweet has since led to the cancellation of business deals with NBA and pulling their games off the television, putting NBA’s billion-dollar economic interest in China in danger.