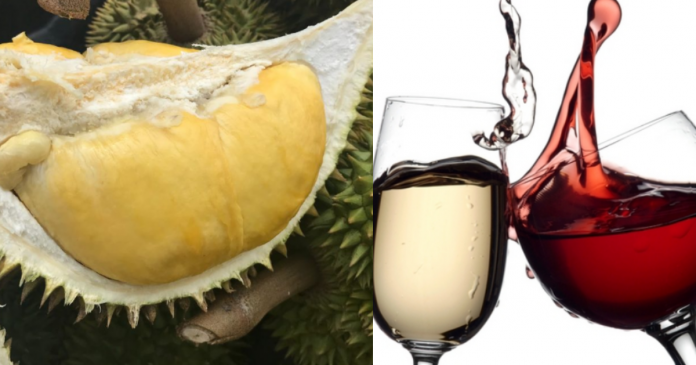 Durian and wine? The bad news is you can only choose either one. Even if you are feeling adventurous, you might want to forget eating durian with drinking alcohol as it has just been proven a fatal combination.

A man from Thailand was found dead in Pattaya last August after consuming both durian and wine at the same time.

According to The Star, the man’s dead body was found on August 14 around 6.30 am with a bottle of wine and a polystyrene container with durian next to him

Police estimated that the man had died for over five hours when his body was discovered.

According to his friend and colleague, the man bought the wine and durian to be eaten while waiting for the bus.

The friend, however, warned him for not enjoying both wine and durian at the same time as urban legend said that it was a fatal combination

The man dismissed his friend’s warning and said, “I’m a local, I’m not afraid.” Unfortunately, he was already dead by the time his friend found him.

So, what happens when you consume both durian and alcohol at the same time?

According to a team of researchers from Japan’s University of Tsukuba, durian contains Diethyl Disulfide, a sulfur compound that making it harder for the body to break down the food you have eaten.

However, if you drink alcohol after eating durian, the alcohol will not be able to be broken down properly in your body, causing the acetaldehyde, a type of acetic acid in alcoholic drinks to travel in your bloodstream, as explained by Georgetown Pharmacy

While there is no scientific evidence that pairing durian with alcohol could result in death, many cases have seen those who do so to suffer from severe headaches, vomiting, and low blood pressure.

People who have heart disease and high blood pressure are not encouraged to pair durian with alcoholic drinks.

These 3 ladies have been best friends for 80 years and...