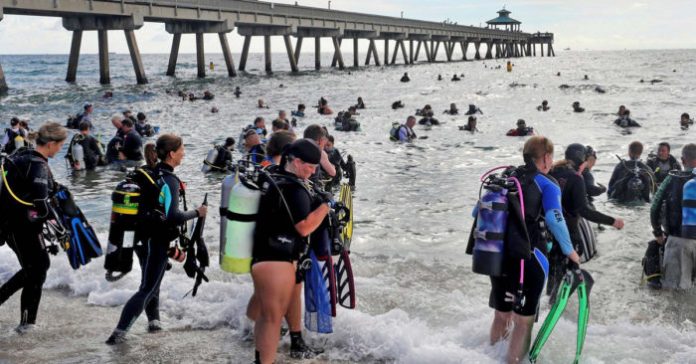 633 divers set a new World Record for participating in the biggest underwater cleanup to collect garbage from the ocean floor at Deerfield Beach.

In the Guinness World Record-cleanup, hundreds of divers wore their wetsuits and air tanks to help scour at least 1,626 pounds of trash off the waters of Deerfield Beach International Fishing Pier in Florida.

The underwater cleanup which took place on Saturday, June 15 was the 15th cleanup.

It lasted two hours as divers from across the world, including as far as Europe and South America came hand in hand to collect the trash

“It was a great time … Everyone was working together and cleaning up one part of the reef or pier,” Tyler Bourgoine. who was one of the divers, told CNN.

According to Bourgoine, the waters off Deerfield Beach are famous for its aquatic life. “That’s one of the reasons why there’s so much debris. People are constantly fishing there,” Bourgoine said.

The previous world’s largest underwater cleanup was set by Ahmed Gabr, a former Egyptian Army scuba diver along with other 613 divers in the Red Sea, Egypt in 2015.

According to National Geographic, over eight million tons of plastic trash ended up in the ocean annually, with 245,000 tons of trash are floating in the sea at most

Plastic trash in the ocean decomposes at a prolonged rate, and once it starts to break down in waters, it will further cause damage to marine life.

Scientists predicted that the amount would increase up to 155 million tons a year if garbage management practices remain unchanged.