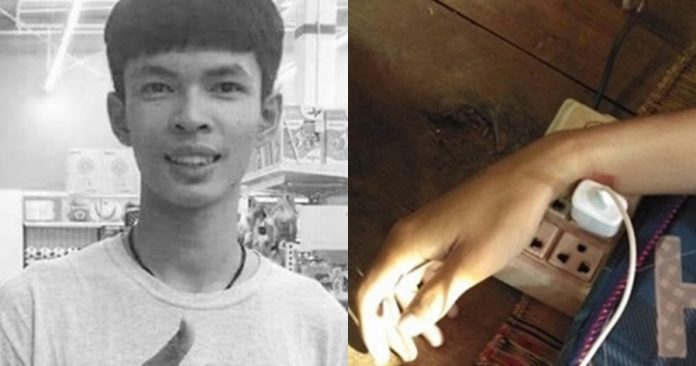 When it comes to using smartphones, many people often do not take the right instruction and care of using one seriously. If you think that using third-party chargers or knockoff cables and batteries are okay, you might want to think again.

While third-party phone accessories are cheaper and easier to find, more often than not that it will cause damage to your smartphone.

Nonetheless, you should be grateful that it only destroys your smartphone as in many cases where smartphones catch fire, explode or cause an electric shock to their owner often involve knockoff and uncertified phone accessories like this 18-year-old man from Thailand who was found dead after his mobile phone exploded while charging.

According to Oriental Daily, the man was playing a mobile game on his smartphone prior to the tragic incident.

When his remains were discovered by local police, the Thai man was lying on his bed with his smartphone still in his hand.

While it is easy to blame his death due to him using his phone while still being plugged into a power socket. Many people still believe that using a phone while charging will cause it to explode but nothing could be further from the truth.

Usually, these explosions and electrocutions are often caused by uncertified charging cords or faulty batteries.

In this case, the man might have used a damaged or a knockoff charging cable to charge his smartphone, leading to him getting electrocuted to death

In Bastobe, Kazakhstan, a 14-year-old girl died after her phone’s battery exploded on her pillow when she was asleep

Alua Asetkyzy Abzalbek was listening to music before she fell asleep at her home. Unfortunately, Alua was found dead with the phone’s exploded battery close to her head the next morning, as reported by Daily Mail.

According to police, Alua’s mobile phone was still plugged into a power socket when she went to bed, causing the battery to be overheated as it was overcharged

Alua was said to suffer from fatal head injuries due to the explosion and died immediately.

Just like other electronic devices that use lithium-ion batteries like laptops and tablets, that is no different when it comes to smartphones.

Hence, that is why manufacturers recommended that users keep their electronic devices like smartphones at a safe temperature.

Hence, you might want to change your phone accessories if you are using knockoff or uncertified ones as soon as possible. Always make sure that your electronic devices are authentic and manufacturer-approved to prevent such accidents from happening.

6-yo dwarf girl adopted by a couple is actually a 22-year-old...