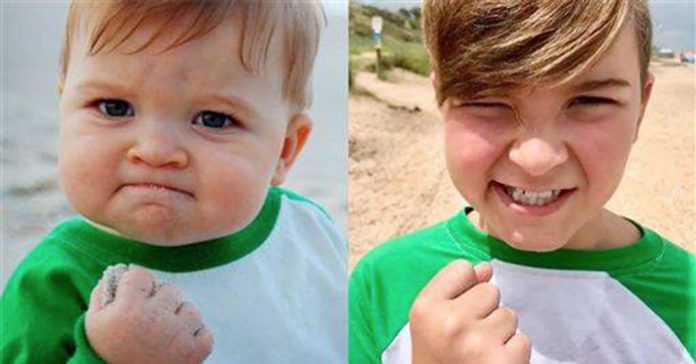 What was just an adorable baby photo of him grabbing some sand on the beach turned out to be a life-saving tool when his father was diagnosed with kidney failure.

It was 13 years ago when Laney Griner uploaded a photo of her baby son, Sammy, trying to eat some sand on Flickr before the photo quickly gained international fame as a popular meme.

According to Laney, Sammy was 11 months old when the photo was taken.

While he looked super satisfied with himself, Baby Sammy was actually about to shove a fistful of sand into his mouth when Laney took his photo, according to ABC News

Captioned as “Success Kid”, his meme has appeared in numerous advertisements and campaigns like Vitamin Water, Virgin Mobile UK and including Virgin Media’s campaign in 2012

While Sammy managed to licensed and earn decent money from his popularity, it was not until his father was in dire need of a kidney transplant they the family figured that they could use Sammy’s fame to raise funds to cover the medical expenses.

However, six years later, after years on dialysis, the only way for his father to survive was to get a kidney transplant and it was not cheap.

Thankfully, their family managed to raise over US$100,000 after Laney set up a GoFundMe campaign.

They then used the money for Justin’s kidney transplant

Today, after more than a decade later, Sammy’s image is still used in ads and campaigns. Other than raising funds for his father’s surgery, Sammy still feels a bit reluctant when strangers ask to take photos with him, The Daily Dot reported.

Nevertheless, he is thankful for the fame and attention he receives

Now, while he does not mind being known as the “Success Kid”, Sammy hopes to be known for his artistic talent. “I would rather be known for my art,” he said.