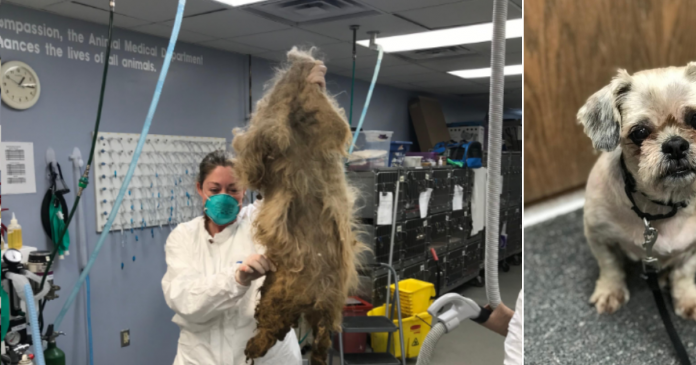 Ellie Mae the Shih Tzu had to go through a tough year of having to live with her matted and ungroomed fur that it basically became almost impossible to shave when she arrived at the Nebraska Humane Society.

According to Fox42, Ellie was found neglected with a “stinking mass of hair” at her owner’s residence in earlier September. When her owner passed away, Ellie was left to fend for herself for days.

Fortunately, she was then rescued just in time before she was brought to the Nebraska Humane Society

Officials said that Ellie could have no survive if she were to be found a few days later.

However, that was not the only surprise they received when Ellie first arrived.

Apart from the dog’s ungroomed fur and being left on her own after her owner died, her nails were also found to be as long as seven inches

According to the workers at the shelter, they believed that Ellie may not have been groomed and properly taken care of for over a year

As a result, the 11-year-old Shih Tzu had thick and tangled fur that it took three staff members and one hour to shave her matted fur

Nevertheless, the matted fur apparently which weighed nine pounds was a blessing in disguise as they said that it protected Ellie from several skin issues and diseases from not being properly groomed for over a year

Ellie also had to undergo surgery for an undisclosed illness.

However, the dog is now recovering well and is now waiting for a new owner to take her home