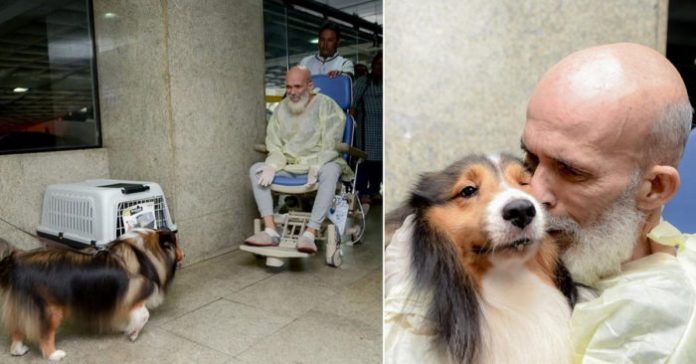 It had been several weeks since Flavio Santos had to stay in a hospital in Brazil to receive treatment for cancer. This also means that he had not seen his pet dog, Agadir, for quite a while.

After learning how much Flavio missed his dog, the nurse who was caring for him decided to arrange for Agadir to visit Flavio at the hospital, The Dodo reported.

When Agadir arrived at the hospital where Flavio was staying, the two quickly embraced each other the moment they met.

It was obvious that Agadir, too, was missing Flavio when he ran towards his owner when he saw him being wheeled over

The two then spent time together during the emotional visit

While it may look like a simple visit between a patient and his dog, the nurses and doctors later learned just how much Flavio’s condition improved after the visit.

Apparently, the short visit from Agadir has appeared to bring both psychological and physical benefits to Flavio

Dr. Rodrigo Tancredi who treated Flavio noticed that he was a lot better than before the visit.

“I was surprised,” Dr. Rodrigo told Globo. “He was conscious, oriented and talking.”

“We visibly noticed his improvement the other day,” the doctor added. “The improvement occurred in a gradual way and remains.”

Thanks to Agadir, it looks like Flavio may get to return home sooner than he expected as his health has begun to improve faster

This was the first time the hospital allowed a pet to visit their owner but after the positive effects they saw in Flavio’s case, hopefully, it will not be the last time for them to allow pets to pay a visit to their owner at the hospital!

A Puppy Escaped from a Shelter and Visited the Grave of...