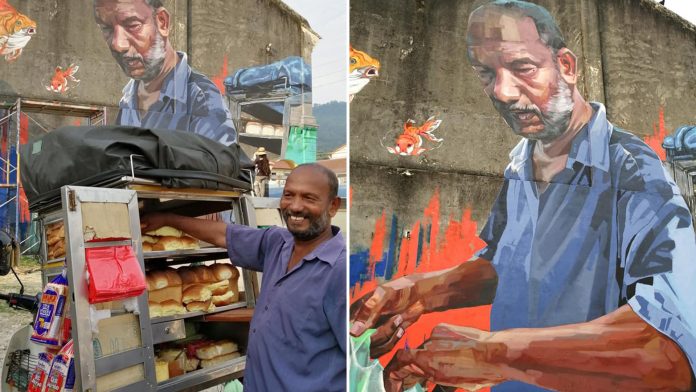 Locals at Balik Pulau in Penang have known this bread seller for over 30 years but it was only recently that he gained fame on the internet after a street artist shared a heartwarming memory of him on social media.

The Malaysian street artist named Acit Raman Abdullah shared a fond story of growing up with the bread seller known as Muniandi for the past three decades in which he recalled how Muniandi still remembered him as a boy who loved doodling on the ground.

“‘I can still remember you are the one who loves drawing on the ground, right?'” Muniandi asked Acit, adding that he reversed his motorcycle after he realized he accidentally blocked Acit’s drawing.

Their encounter that day has left a long-lasting impression on Acit who was surprised that Muniandi could remember him as a boy who used to draw on the ground despite 30 years have passed.

Fast forward to years later after Acit has made a name as an artist, he decided to contact Muniandi if he could draw a mural of him.

He recalled that he did not really have to introduce himself to the bread seller as he had already known who Acit was and where he lived.

“‘I even know your mother. She used to exchange coins with me,'” Muniandi said to him.

“Muniandi is a legend at Balik Pulau. Everyone knows him regardless of their races. He has been selling kaya bread for 30 years,” Acit wrote in his Facebook post.

In his post, Acit wrote that during his time selling kaya bread for the last three decades, Muniandi has managed to see his young customers grow up to have children on their own.

“I am most impressed with Muniandi for the sacrifices he made for the sake of his family. All of his children have grown up to be a doctor, a lawyer and one who is studying to be a chemical engineer,” he continued.

“Hats off to him. He can be an icon for Merdeka or Malaysia Day this year,” Acit wrote.

Nurse cares for premature baby and meets him 28 years later...