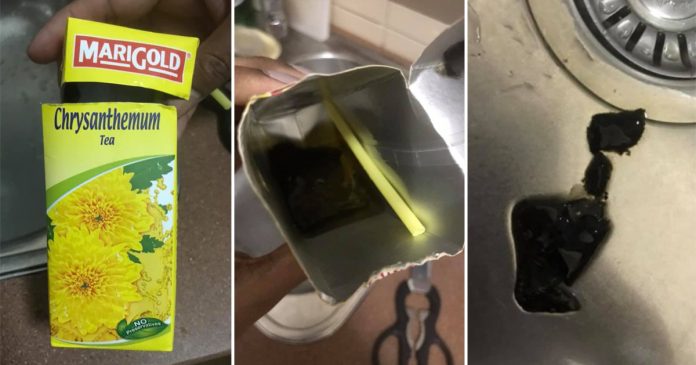 As we drink beverages from the opaque carton and can, no one ever really questions how the inside would look like. As for this Singaporean woman, she got a chance to see the inside of the drink carton—but not for the best reason.

The woman shared on her Facebook that she was drinking a carton of Marigold Chrysanthemum Tea two weeks ago when she suddenly felt a ‘pulp’ like substance in her mouth.

Immediately spat the things out, she was horrified to see a black and jelly-like substance that came out,

And it’s not grass jelly if that’s what you’re thinking.

Disgusted by the encounter, she cut open the top of the carton and found the same nauseating black substance at the bottom of the carton she was drinking from. Terrified by the incident, she contacted Marigold Singapore to bring up her complaints about her drink.

However, she said that they allegedly did not take her seriously.

“I had sent an email to Marigold and had to call them to get an update of what was the contamination about, and told them to send me an email update but no one took it seriously,” she wrote.

When it comes to this, we can never really sure the next time we’re drinking it again. So make sure to always be careful when drinking out of these opaque carton or cans.

Hopefully, this doesn’t happen to any of us!