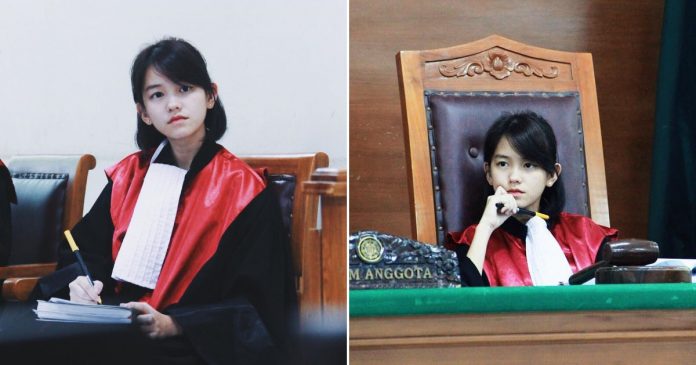 Young, beautiful, and smart are what most likely come to many people’s minds first when they see this woman dressed in a judge’s robe.

Recently, a Twitter post of a series of photos featuring a young woman dressed in a judge’s robe went wildly viral on the internet as it quickly garnered 21, 475 retweets and 33,139 likes since it was posted on Jul 13.

Ever since the photos of the young lady went viral on social media, the netizens were eager to find out who was the charming lady and what she had done to actually become a judge at such a young age.

It turns out that the impressive lady who had captivated many people’s attention on the internet was a 22-year-old student who is currently studying law at Gadjah Mada University in Yogyakarta, Indonesia.

Known as Leanna Leonardo, she has clarified that while the photos may look like she has become a judge, she is actually still a student.

However, she will be a judge in the future as she is studying hard for it.

Apparently, the viral photos were taken when she was practicing moot (a mock judicial proceeding).

In her Instagram story, she also explained that she was not a member of the Indonesian version of Japan’s famous girl group AKB48, JKT48 and asked people not to kidnap her.

Nevertheless, this was not the first time she went viral on social media.

Oh Angel youre going to hell Guys! checkout their IG Account @trashteticshop and @trashtetic.exe for the complete products!

According to boombastis, she had experience being in the spotlight after she went viral on 1CAK and on the @ugmcantik list.

However, this was the most viral she has ever been.

While many netizens professed that they had a crush on Leanna, unfortunately, she already has a boyfriend whose photos she proudly shares on her Instagram account.

Well, they certainly look like a sweet couple, aren’t they? We hope that Leanna will achieve her dream to become a judge soon!

Millionaire Thai trader offers US$300,000 and his business to the man...