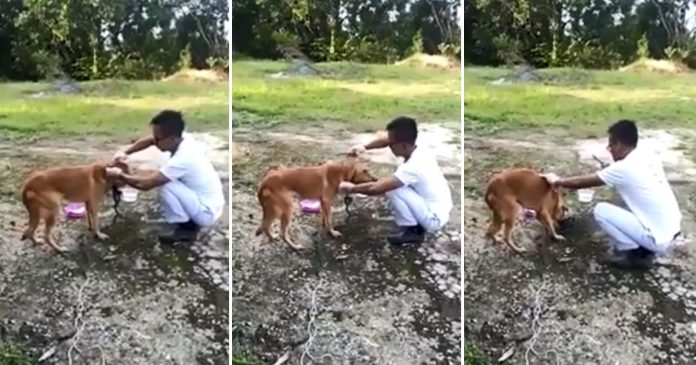 Recently, a Facebook user with the username Mohd Bedok Bedik La went viral after uploading a video of his experience meeting a dog in distress and his brave effort to save the dog’s life.

Mohd Bedok mentioned in his Facebook post that he just got back from work when he saw the dog with a long rope around its neck.

“My first time touching a dog. As I got back from work, I saw a dog near my house. I tried chasing it away, but that’s when I noticed a rope tied around its neck that was strangling it. It had this sad look on its face as if he was asking for my help and sympathy.”

As his first time to encounter a dog in a very close distance, Mohd Bedok was quite afraid of being bitten despite determined to help the poor pooch.

The kind man mentioned that he initially wanted to ask neighbors for help, but the closest one was a distance away—hence the situation happening in the video.

In a video taken from a distance by Mohd Bedok’s also-terrified wife, the man can be seen carefully cutting the rope on the dog’s neck and successfully helping the dog.

“I braved the risk. I put on my gloves, grabbed a pair of scissors and fed it chicken. It was really hungry, so I petted the pooch to help it calm down.”

Despite being terrified of being bitten initially, Mohd Bedok’s affection for the dog grew and he decided to adopt it!

“I named him Johnny. I applied some ointment on the wound, and thankfully he got better after removing the noose. After treating him, I took several selfies. Now he stays around the garden, helping me look after it.”

After Mohd Bedok’s post went viral, a lot of people were praising him for his kind gesture and brave effort to save the dog.

Some were also reminded of how a dog is an extremely loyal friend, so Mohd Bedok has probably gained himself a companion of a lifetime.

You did the right thing, Mohd Bedok!