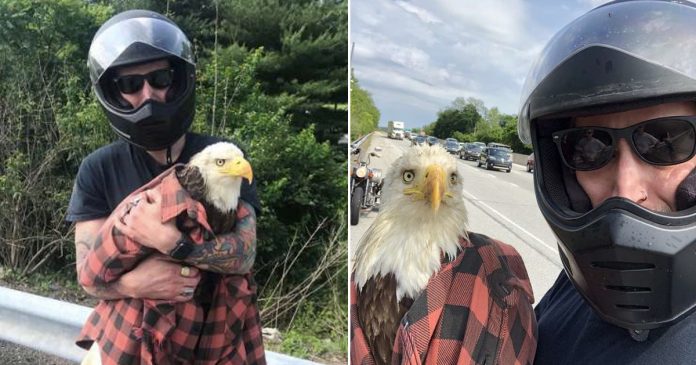 What would you do if you were driving on a highway and saw an injured eagle lying on the road? For this motorcyclist, he quickly stepped up to rescue the eagle and got it out of the busy route.

“I looked down to see why everyone was stopping and there was a bald eagle in the middle of the road,” Dandon Miller told The Dodo.

“Another person was there and they kind of nudged her a little bit to see if she would walk off the road or fly away. She spread her wings open and was not going to go anywhere.”

Dandon was riding his motorcycle on a highway in Pennsylvania on Memorial Day weekend when he saw the injured eagle lying on the highway.

Many drivers were stopping but they were not quite sure what to do to help the injured eagle. Dandon then immediately stepped up and took the injured bird to his motorcycle.

He then called 911 and was told to contact the Tri-State Bird Research and Rescue, a bird rehabilitation center. However, the staff at the center said that it would take them 45 minutes to arrive at his location.

Dandon who never handled an injured eagle before did not know what he should do to the bird.

Nevertheless, he knew he could at least comfort the frightened bird so he took his shirt off and used it to wrap around the eagle.

“I was just trying to keep her calm and make sure she knows she’s secure, and I wasn’t going to drop her or anything,” Dandon said.

“It was just amazing to hold that bird and for her to be calm like that. Just amazing.”

Thanks to his quick thinking to rescue the bird and wrapping it with his shirt, Dandon received praises from the rehabilitation staff when they arrived.

The eagle was then taken to the Tri-State Bird Research and Rescue for further treatment. Luckily, the bird did not suffer from any serious injuries.

“She had a mild injury to one eye and soft tissue injuries, but no broken bones,” rescuer Rebecca Stansell said.

“Her wounds were treated by our wildlife veterinarian while the eagle was under anesthesia. The unexpected can always happen, but we are optimistic that she will make a full recovery,” she added.

It seems like the eagle is recovering well at the rehabilitation center according to the Facebook update that the Tri-State Bird Research and Rescue shared on May 29.

The eagle was said to be resting comfortably and was being closely monitored.

As for Dandon’s flannel shirt, the shirt now has several large holes on it but he knew it was for the best.