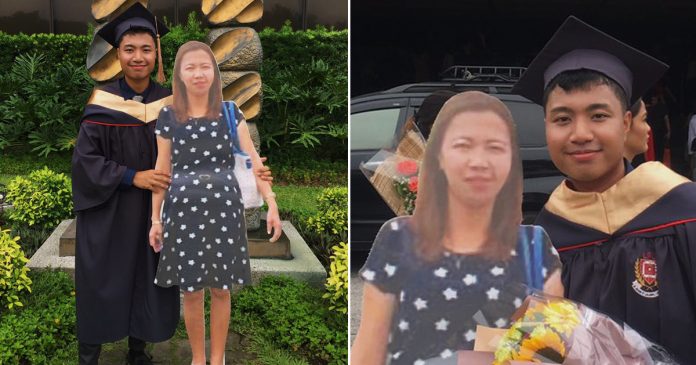 His late mother may have not been able to attend his graduation ceremony but Paulo John made sure that she was still included in his graduation photos.

Along with a life-sized of a cutout of his mother’s photo, John posed in graduation robes to commemorate the special day.

All Paulo John wanted when he graduated with a bachelor’s degree was for his mother to attend his graduation ceremony. Unfortunately, it first seemed like it was not possible when she passed away too soon.

When he finally graduated with a Bachelor of Science in Business Administration degree, John knew that his mother had to be in his graduation photos even in the form of a cutout.

“To my most beautiful mother! Ma, your eldest has graduated I hope you’re happy in the presence of God. I finished school because this is what you wanted. I love you very much,” he wrote in the caption.

In an interview with Coconuts Manila, John said that it had always been a dream of his to see his mother to attend his graduation ceremony. However, she passed away in 2016 due to complications from pneumonia.

Hence, as a way to pay her a special tribute, the fresh graduate then got a styrofoam cutout that was measured exactly to match his mother’s height, 5 feet and 2 inches (approximately 157cm).

It may seem peculiar to some people but to John, it was his way of making sure he could at least feel his late mother’s presence at his graduation.

“I had that standee made so that I could at least feel my mum’s presence on graduation day because my graduation from college was our dream.”

According to John, his mother was the one who made a lot of sacrifices to ensure that he could attend college.

“She was a single parent [for a few years]. She sent me to private schools. And we were very close to each other. My mother didn’t ask my stepfather to send me to college. All of the money came from her and my aunts who helped out,” he said.

“When I brought it (the cutout) to my graduation, I was so happy because I really felt I was with my mum.”

We believe that his mother would be so proud of John if she could attend the graduation ceremony and saw that John kept his promise to graduate from college.