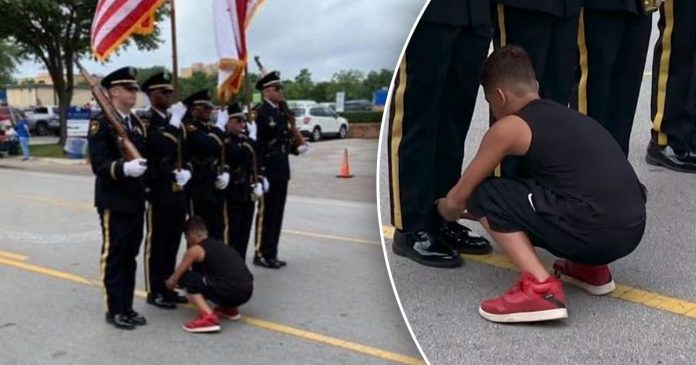 The last thing you want to be seen doing in public is most probably tripping and falling over your untied shoelaces—and that would be even more embarrassing when you’re an honor guard member at a prestigious event.

According to Inspire More, Officer Jerrick Wilson proudly held up the US flag as the Arlington Police Department’s Honor Guard lined up at the start of a Fourth of July parade in Texas this year.

However, the proud moment was distracted as Wilson realized the laces of one of his shoes was untied.

Luckily, Josh Brown was just waiting nearby with his family and ready to jump to give a helping hand. The little boy admitted that he’s quite nervous when another officer approached him and asked for his help.

Despite being nervous, Brown successfully did a great job fixing Officer Wilson’s shoes.

At the start of the 4th of July Parade this young man ran out to help one of our Honor Guard members whose shoe came untied. Thank you Josh! We should all be so kind. I have a Chief Challenge coin for you. #America pic.twitter.com/lQr2rxVWQC

Wilson was not the only one grateful for Brown’s sweet gesture, but the same goes to other parade-goers—and thousands more on social media who cheered on the little boy courageous act. Local Wendy Collins Smith didn’t want to miss out on the memorable moment and snapped a photo of the touching moment and shared it on Facebook.

“We need more of his type in this world!”

After the memorable incident, Wilson got a chance to thank Brown in person.

“I had a long way in the parade to go and it definitely saved me from dealing with a headache of worrying about my shoe coming off while carrying a US flag,” explained the officer.

Expressing his gratitude, police Chief Will Johnson posted on Twitter that he had a special gift to present to the little boy—his Chief’s Coin. Brown’s grandfather, Pastor Dennis Wiles couldn’t help being proud of his grandson for helping the police and honoring his country.

So he posted about it on his social media too!

Even more amazing, Brown actually wanted to be an officer himself when he grows up! You do you, Brown!

Watch Brown talking about the incident and the time when he met Wilson: