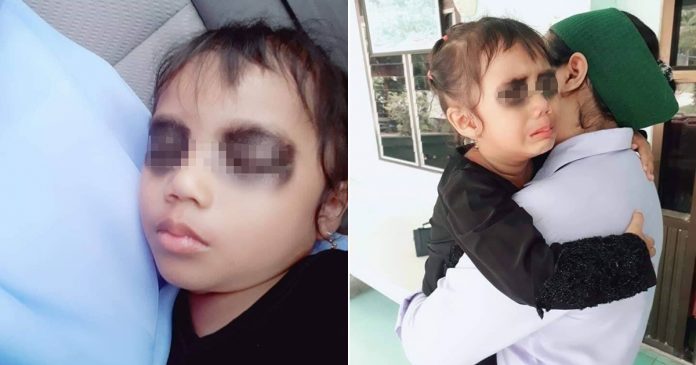 Recently, a post about a little girl with “panda eyes” made multiple rounds on social media as netizens were entertained by the trick used by the girl’s parent to stop her from getting addicted to the smartphone.

It first began when the little girl started to develop an addiction to the smartphone and struggled to get away from it that her mother then came up with the trick up her sleeve.

When the girl was sleeping, the mother decided to apply black eyeshadow around the girl’s eyes.

According to Sin Chew Daily, the girl later screamed after finding how her eyes looked like after she woke up from her sleep.

“After waking up and seeing herself in the mirror, she screamed. I told her it’s because you played (on the phone) so much,” the mother said.

It was reported that the incident happened somewhere in Thailand.

It did not take long before the photos quickly went viral on the internet as many parents were amused by the trick and told their friends to use the same trick to curb their children’s smartphone addiction.

While the trick may have proven to be effective in stopping the girl from getting addicted to her smartphone, it may not be the best trick to stop young children from using smartphone too much.

Public Health Malaysia has recently released a warning to parents for not doing the trick to their children as it can leave the young children psychologically scarred for life.

In a statement on their Facebook account, they explained that the trick can cause a traumatic experience to young children and it can stay in their long-term memory.

They further explained that while it was up to the parents how they want to educate their children, pulling a prank or scare was not the best way to break children’s bad habit.

“Every parent has their own unique way of raising their children. These kids need to know about the effects, consequences, and responsibilities from their own actions but parents make their own decisions on how to educate their children.”

4yo girl has to undergo eye surgery due to excessive use...

This effective method to treat fever in children is popular among...