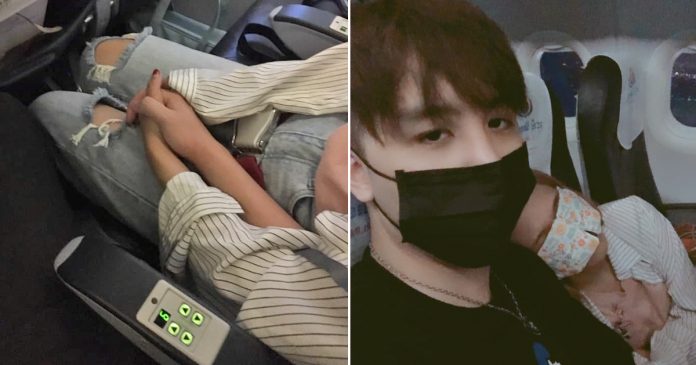 Life appears to be a fairytale for some people or in this man’s story, straight out a romantic drama!

It may be hard to believe at first but one Taiwanese man named Ya Chao shared on Facebook on July 5 the moment his love story began on a plane when he sat next to his now-girlfriend.

He was on his way back home after he got fired from his job.

While waiting for the plane to take off, a woman who seemed to be quite occupied with her bags caught his attention.

“You may not believe it even if I tell you…We really met on the plane. Let me tell you what happened. I saw her after boarding the plane,” Ya Chao wrote in his post.

It did not take long for the woman to ask for Ya Chao’s help to stow her bags in the overhead compartment as she may have probably struggled to do it herself.

Coincidentally, their seats were next to each other and the female passenger then offered Ya Chao some cherries as a token of her thanks.

“She took out some cherries and offered them to me. Perhaps she wanted to thank me for helping with the luggage,” he continued.

After the plane took off, both Ya Chao and the woman grew closer to each other and began to share a conversation. “The plane ride was only a few hours. And we talked about everything under the sun,” he wrote.

However, their plane suddenly hit turbulence and that was when they started holding hands.

“I held her hand tightly and reassured her. I didn’t know why, I suddenly had the urge, deep down, to protect her,” Ya Chao recalled.

Fortunately, the turbulence passed and they manage to land safely in Taiwan. Nevertheless, it seems that their story did not just end there after their flight arrived at their destination.

Ya Chao then helped the woman to retrieve her check-in luggage as she had left some important travel documents in the luggage required to pass through the immigration and customs checkpoint.

After Ya Chao bought her a travel card and a drink from 7-Eleven, it had become obvious that their feelings were mutual and the rest is history.

“We only knew each other for one day. But it felt like we’ve known each other for many years. In the end, we got together. Because of one plane ride,” he wrote.