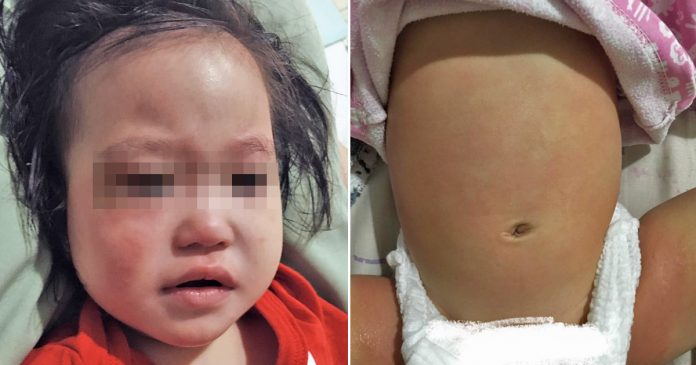 A Malaysian mother learned the hard way when she forgot to disinfect the baby chair her baby daughter used when they were eating outside.

In her Facebook post, the mother whose name was Agnest Chew wrote it was too late when she realized the importance of disinfecting baby chair when they eat outside after her baby daughter suffered from a serious allergic reaction.

“After this incident, I’ve discovered that sanitizer is really important. Sometimes when you’re eating outside with your children, you cannot just simply wipe the baby chair but must use sanitizer to clean the chair properly,” Chew wrote.

According to her, she only used wet wipes to clean the baby chair’s table but not the whole seat.

It never came across her mind that her daughter would have an allergic reaction from sitting in the baby chair.

“Before my daughter sat down, she was fine,” she added.

“After she sat on the chair for a while, I noticed her eyes getting a little red and when she touched her ears and neck, these parts started to get red as well. She didn’t want to eat and started crying for me to carry her.”

She initially thought that the redness was the reaction of mosquito bites but it was only when they returned home that the mother realized it was an allergic reaction.

“I realized her face, neck and parts of her body was red, itchy and hot to the touch,” she continued.

Unfortunately, the redness and itchiness did not subside when she used a wet cloth to wipe her baby daughter’s body and applied some aloe vera cream on the baby’s itchy skin.

Just within half an hour, the redness and itchiness have spread to her baby daughter’s buttocks, back and legs.

Chew then brought her daughter to the doctor who confirmed that her daughter was suffering from an allergic reaction caused by dust, dust mites or something similar.

However, the mother wrote that she did not blame the restaurant and instead, took the blame herself as she did not properly clean the chair before she let her daughter sit in it.

At the end of her post, Chew warned other parents to always remember to disinfect baby chair when eating at a restaurant to avoid similar mishap from happening to their young children.