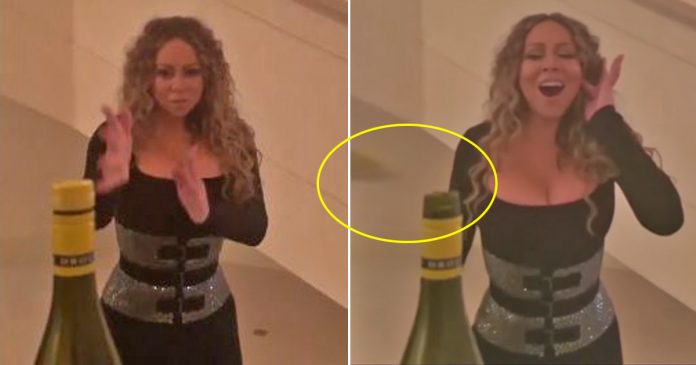 As the #BottleCapChallenge becomes increasingly popular on social media, more and more people try to take on the latest viral internet sensation including celebrities.

Many of Hollywood celebrities have come up with their own incredible version of the Bottle Cap Challenge with the likes of Kendall Jenner, John Mayer, Diplo, and Justin Bieber.

The Bottle Cap Challenge requires the person to use a roundhouse kick to unscrew the cap of a bottle.

Nevertheless, none of them seems powerful enough to kick the bottle cap off the lid without even having to lift a finger or a leg like the ultimate diva singer, Mariah Carey!

Instead of using a kick, Carey decided to use her famous five vocal range to uncap the bottle.

In the viral video of Carey, the dive songstress who is clad in a black crystal-embellished corset can be seen showing off an elegant karate pose as if she is ready to kick the cap off the bottle lid.

She then launches an attack but instead of kicking, Carey shows off her signature whistle register notes and sends the cap flying!

Carey later shared the video with her 8.2 million followers on Instagram. Needless to say, she instantly gained over a million likes for her Bottle Cap Challenge video!

Many of her fellow celebrities have praised the diva including Busta Rhymes, Rita Ora, Ruby Rose, Jordin Sparks and her former spouse, Nick Cannon.

Certainly, no one could have done it like Mariah Carey. She only needs to use her powerhouse vocals to defeat anyone else!

That is the power of a true diva, indeed.

Lady with the longest legs in America was bullied as ‘giraffe’—but...