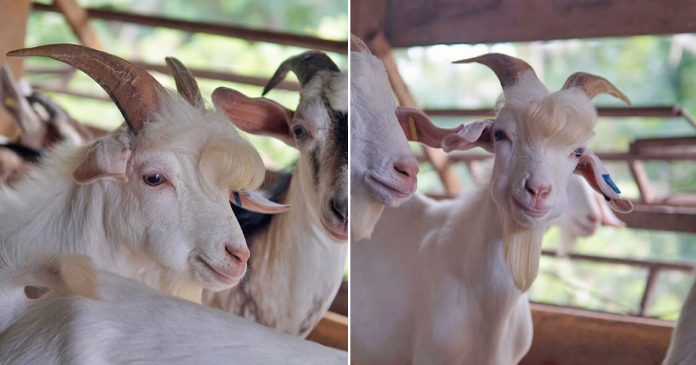 Remos may be an 11-month-old billy goat at Muhammad Livestock Farm in Perak, Malaysia but his good looks have definitely turned heads of many.

Remos the handsome goat first rose to popularity when photos of him striking a cool pose in front of the camera went viral on Facebook.

The farm first uploaded the photos on July 6. Since then, the post has received 1,200 likes and has been shared 3,900 times.

“Because he’s handsome, we took more photos,” the caption read.

According to Remos’ owner, the goat actually loves cameras and is always ready to strike a pose when he spots a camera near him.

“Remos loves being photographed. Whenever he sees a camera, he would strike a pose and it would look like as if he was smiling in the photos,” Ahmad M. Fadzil told New Straits Times.

Ahmad said that he initially bought Remos and other dairy goats in an effort to expand his business.

“When I was selecting some female goats, I saw Remos and how beautiful he was. I bought him immediately,” he added.

Nevertheless, his good looks do not come cheap. According to Ahmad, goats require proper maintenance and clean environment.

Apparently, the farm owner was not the only one who thought that Remos was gifted with good looks.

Ever since the post went viral on the internet, the netizens, too, were captivated by Remos’ golden locks and his playful smile.

“When someone said, ‘handsome like a goat’, this is what they mean,” one netizen commented.

When someone said, “ handsome macam kambing”.

This is what they mean. pic.twitter.com/Jsgtlszsy7

Now that Remos is getting famous on the internet, Ahmad said that he will never sell the goat despite getting offers from some buyers.

“Some have asked if I’m willing to sell Remos. However, I declined their offers nicely and recommend other goats to them instead.”