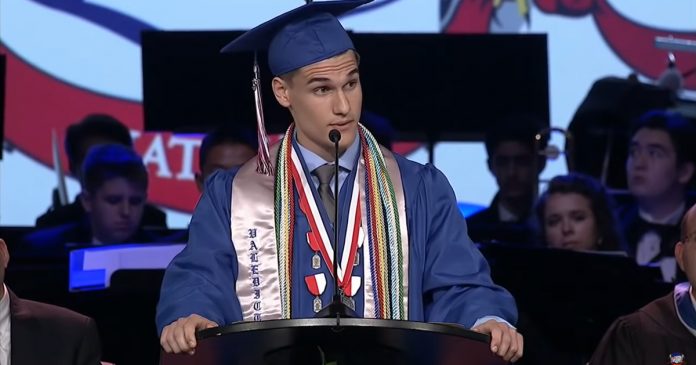 While many students would do anything to graduate top of their class as a valedictorian, a Valedictorian from The King’s Academy admitted that he regretted graduating as one.

Kyle Martin who graduated top of Class of 2019 from his school in West Palm Beach, Florida revealed that graduating as a valedictorian was not his best achievements in his life.

In his graduation speech, Kyle admitted that he was over the moon upon knowing that he would graduate with the much-coveted title but he was joyful only for a brief moment.

“It felt so good when I heard my name announced with his title….for about 15 seconds,” the valedictorian said.

“On the sixteenth second, I sat down on my seat and I thought, that’s it?” he added.

Kyle continued his speech saying that while he finally managed to achieve what he wanted after years at school, he revealed that the title made him look back on his life for the past eight years.

During the period, while he excelled in school, he had to sacrifice a lot of relationships as he was too focused on graduating as the best student that everything else fell second.

“Working hard is good, it is in fact biblical. But it should not be done for the sole purpose of a goal for the sake or at the expense of relationship with others,” Kyle said.

He explained that no one should sacrifice their relationships for the sake of happiness that would only last 15 seconds.

Kyle put an emphasis on the importance of relationships, especially ones that matter.

“Have no regrets in the sixteenth second. Nothing is more important than your healthy relationships, nothing,” he said.

“Relationships are where we get to influence, impact, and change people’s lives. Your life cannot be meaningful without them.”

His eye-opening confession has received praises from everyone including the netizens who were inspired by his speech.