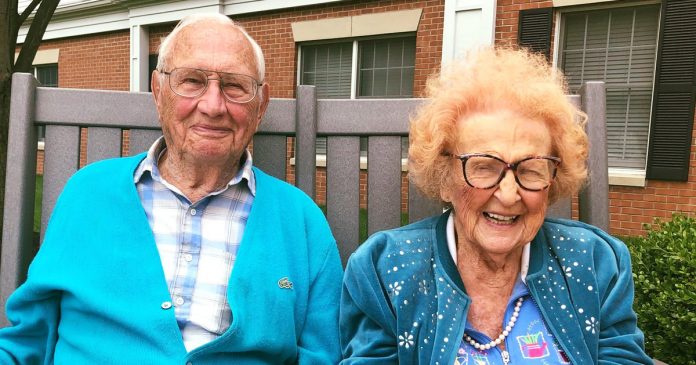 It is never too late to profess your love and show your commitment to your partner, no matter how old you are, just like these newlyweds from Ohio who are 100 and 103 years old respectively.

Newlywed couple John and Phyllis Cook just got married recently and are now celebrating their marriage together at the Ohio senior living facility.

Newlyweds John and Phyllis Cook are celebrating their new lives together at their Ohio senior living facility.​ https://t.co/0NYAgaoIuk

The two, however, had a different plan when they went to the courthouse to get their marriage license last week. It was there that they were told they could get married on the spot.

“It wasn’t the plan, but we got here and they said, ‘we could marry you here.’ I said ‘good, let’s get it over with,'” John who is a World War II veteran told CNN affiliate WNWO.

John and Phyllis had been dating for a year when they decided to tie the knot.

Congratulations to the newlyweds! John and Phyllis met while living at Kingston. At the young ages of 103 and 100 years…

Posted by Kingston Residence of Sylvania on Friday, June 28, 2019

Both John and Phyllis have lost two spouses in the past.

The newlywed couple is grateful to have another chance at finding love for the third time.

They’re at least a century old. On Wednesday, John and Phyllis Cook tied the knot. https://t.co/d1yZmbzN5L

Now spending the rest of their lives together enjoying meals and sitting in the sun in their mobility scooters at the Kingston Residence of Sylvania, John and Phyllis absolutely adore each other.

Nevertheless, the two also agreed to give each other space.

“We were just compatible in a whole lot of ways, found ourselves enjoying each other’s company,” John said followed by Phyllis, “What we do, we keep both of our apartments. He’s upstairs, and I’m down.”