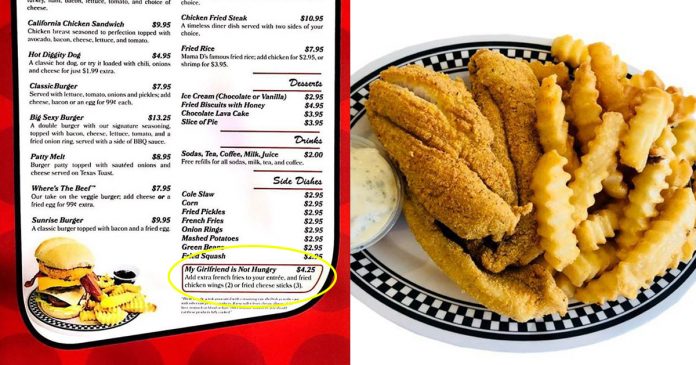 We all have that one friend who refuses to order when going to a restaurant for a meal because they do not feel hungry or are probably on a diet but end up ‘stealing’ our food.

For this, a restaurant in Arkansas has the perfect solution and menu option just in case that one friend does not feel like ordering anything.

The restaurant known as Mama D’s which is located in North Little Rock, Arkansas is currently in the limelight after an online post with a photo of their menu that went viral on social media.

If it is the restaurant’s strategy to get people talking about them online, they have certainly succeeded as netizens were simply amused by how creative their menu was.

Apart from the typical side dishes for customers to choose from ranging from coleslaw to french fries and onion rings, the restaurant also has a “my girlfriend is not hungry” on the menu.

Diner Nick Chisler who spotted the hilarious menu found it quite amusing before he posted a photo of the menu to Facebook.

EDIT: Sooooo I didn’t expect this to reach so many people. With that being said I would like to say where it come from….

It turns out he was not the only one who was entertained by the creative menu but also thousands of other Facebook users. His post quickly gained 20,000 likes and over 3,000 comments after he posted it online.

For the “my girlfriend is not hungry”, diners have the option to add an extra order of french fries as well as chicken wings or fried cheese sticks.

Apparently, many netizens found the menu option to be relatable. “All menus need this for me,” one Facebook user commented.

“They [are] on point with that one lol,” another user wrote while another said, “Best menu I’ve ever seen.”

So, the next time you are bringing that friend to a restaurant, you know exactly what to get!

Priest from Philippines, Goes Viral For Humorous Homily to the...