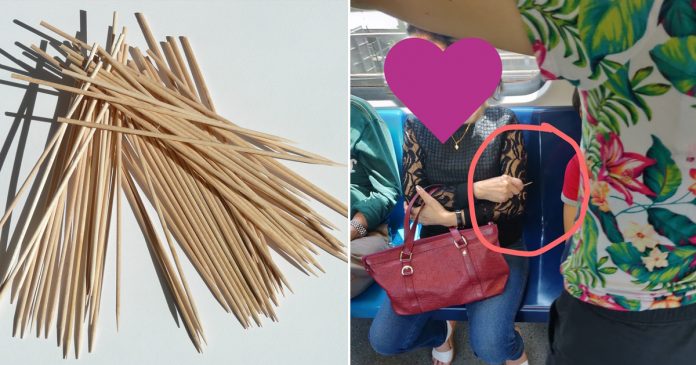 If you are used to commuting to work or school by public transportation, there may be awkward times when you witness someone falling asleep on other passenger’s shoulders.

Unfortunately for this lady, she was not a bystander but rather the very person who had to endure the awkward moment when a tired passenger fell asleep next to her.

In a Reddit post that has gone wildly viral on the internet, the lady can be seen securing her personal space with a small yet sharp and powerful tool — a toothpick.

In the photo, the lady holds the toothpick in the direction of the sleeping boy next to her.

Apparently, the lady had to take such unconventional measure as the boy kept falling asleep on her shoulder multiple times throughout their journey on the crowded train.

The boy who might be around four or five years old seemed to be accompanied by his caretaker or his parent.

According to the post, the caretaker allegedly did not care that the sleepy boy had made the lady uncomfortable on her train ride.

The post also explained that the lady refused to change seat despite her husband made an offer to her.

When the post gained spotlight among the netizens, it has received mixed reactions as netizens were divided between the lady’s and the boy’s sides.

Some netizens shared their sympathy with the lady as she had her right to protect her personal space with the toothpick. Some even commented that the lady should have taken up her husband’s offer or dealt with the caretaker about it.

However, some netizens did not agree and took the blame to the caretaker who failed to intervene with the frustrating situation.