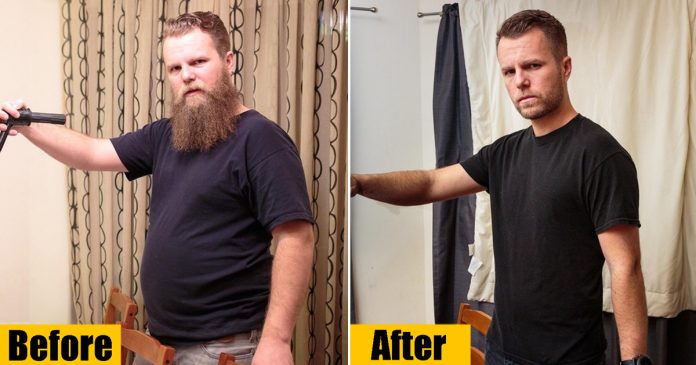 Apart from high-calories food and lack of exercise, drinking beers and wine on a regular basis is also one of the major reasons for weight gain and this Californian shows just how amazing it can be when he decided to cut his drinking habit for good.

Cheyne Kobzoff has spent years of his life drinking beers and wine but it was not until he was in his 30s that he began to turn to alcohol for daily pleasure.

Kobzoff who is a husband and a father would start to chug beer as soon as he returned home from work. It became a habit of his for many years that it gradually developed into an unhealthy habit.

In an interview with Tonic, he admitted that his drinking habit caused him to drink as many 12 cans of beers a night including a glass or two of wine with his wife when he got home.

The father knew that it had turned into a bad habit and he wanted to quit drinking but often contemplated on how to do it.

Then, one day, he went cold turkey and quit his drinking habit for good on March 23, 2016.

One year after he quit drinking, Kobzoff looks totally different than he used to and it is amazing!

Just like how one started to include a healthy diet or an exercise routine in their daily lives, Kobzoff managed to shed off pounds by just quitting alcohol.

Thankfully, he documented his progress throughout the year so many could see how drastic his transformation is. Kobzoff lost 53 pounds and that is not just what he gained from quitting drinking.

He also managed to stay sober for a year and it totally transformed his body and mind.

His before-and-after photos have gone viral since he posted them on Reddit and has inspired thousands of people worldwide who struggle from the same issue.

According to Kobzoff, it was not easy to go cold turkey at first but he later found out that exercise could help him with alcohol withdrawal.

Since then, he began to take up running and exercise whenever he could.

“No more heartburn… My hair doesn’t fall out. I can do pull-ups, sometimes I have abs, I can outrun my dog if he gets out. I don’t have white tongue or a bar tan. I don’t stink like [a bar]. Pretty much LIFE IS PRETTY [EXPLETIVE] GOOD RIGHT NOW. Because I don’t drink,” Kobzoff summed up.

Kudos, Kobzoff! You are looking great!

One of the strongest antioxidant fruits, one guava can remove nitrite...