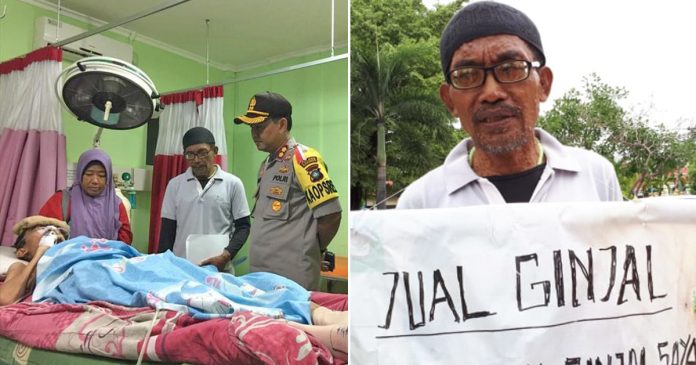 “Kidney for sale. I am selling my kidney for the treatment of my child’s brain tumor.” This was what Eli Kristianto wrote on the sign he wore around his neck recently.

However, his son was forced to return home since they could no longer afford to pay the medical bills.

Indonesia’s national healthcare program (BPJS) had previously only covered Wiguna’s treatment costs partially which has led to Kristianto accumulating a debt of 14 million rupiah (US$ 994).

Kristianto knew that selling organs is illegal in Indonesia but as his son was in dire need of medical treatment, he did not know what he should do. “I was confused, I did not know what else to do to find the money for the treatment fee for my child,” he told Kumparan.

Desperate to raise money for his son’s treatment, the 59-year-old father then went to the entrance of Tanjung Balai Karimun port in Riau and brought with him the sign, saying that he wished to sell his kidney.

It was only a matter of time before his heartbreaking photo and story circulated around social media.

Thanks to the father’s story going viral, the hospital where Wiguna previously received his treatment announced that they would operate on him for free.

They also said that their plan to transfer Wiguna to another hospital in Batam has been canceled.

On July 1, Wiguna underwent surgery to remove his brain tumor with eight doctors involved in the high-risk operation.

The surgery went smoothly and he is now in a stable condition.

If Kristianto had not bravely put his kidney on sale and went to the port with his sign, they might be still struggling to find the money for the operation.

What Kristianto has done is nothing less than amazing and selfless, all for his beloved son’s life.